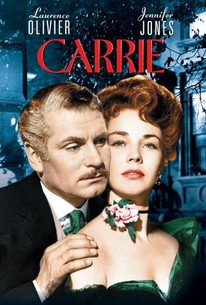 Carrie is based on Sister Carrie, a novel by Theodore Dreiser. Dreiser's clumsy, unwieldy prose is streamlined into a neat and precise screenplay by Ruth and Augustus Goetz. Jennifer Jones stars as Carrie, who leaves her go-nowhere small town for the wicked metropolis of Chicago. Here she becomes the mistress of brash traveling salesman Charles Drouet (Eddie Albert), then throws him over in favor of erudite restaurant manager George Hurstwood (Laurence Olivier). Obsessed by Carrie, George steals money from his boss to support her in the manner to which he thinks she is accustomed. Left broke and disgraced by the ensuing scandal, Carrie deserts George to become an actress. Years later, the conscience-stricken Carrie tries to regenerate George, who has fallen into bum-hood. If Laurence Olivier seems a surprising casting choice in Carrie, try to imagine what the film would have been like had Cary Grant, Paramount's first choice, accepted the role.

William Bailey
as Man at Bar

James Flavin
as Mike the Bartender

A. Ben Astar
as Louis the Headwaiter

George Melford
as Patrons at Slawson'

Al Ferguson
as Patrons at Slawson'

Jack Roberts
as Bum at Hofer's

The direction, as might be expected, is as polished as ebony, occasionally lingering a little too long perhaps to suck the substance out of a scene, but never pausing to philosophise or preach. The story is told simply and well.

Expertly directed by William Wyler, and the skilled cast includes Laurence Olivier in a finely shaded portrayal of a middle-aged man whose passion is his doom.

remarkable acting, better than Olivier's showier roles in those well-known Shakespearean movies, and not to be missed

This movie is a depressing, sad, and probably very realistic drama. If you like that, you'll like this movie, but I found it really boring.

Fine version of Dreiser's story considering the period when it was made. Wyler's assured direction is a big plus. Jones' fussy nervous performance is a drawback although she improves towards the end of the film. She's overpowered however whenever Laurence Olivier is on the screen giving a masterful portrayal of a man slowly disintergrating. Miriam Hopkins is also very fine as a cruel and vindictive wronged wife.

"carrie" is adapted from classic realism satirist theodore dreiser's "sister carrie" which parodies the metropolitan alienation on uptowners, and the essence of the novel is about the futility of dreams among a bunch of soulessly philistines without spiritual substance, estray in the immense sphere abound with materialistic inquisitions. but somehow the movie production transmutes into a dirge of a romantic steer with the veil of overflowing sentimentality which invetibly leads to melodramaticity. it transforms into a showcast vehicle for laurence olivier as dashing middle-aged man suffering from a suffocating marriage to a cruel uncaring woman, then he seeks solace from a burgeoning fair carrie as the love of his life. depraved by his obnoxious wife's confinement, he commits thievery to elope with carrie by deceiving carrie into the train with false excuse. but the script grants abundant mercy to the olivier's hurstwood who is merely compelled by the relentless opressions of a frigid woman. and later hurstwood degenerates into street bum, but his torch for carrie remains flamy, at last he condescends himself into panhandling from carrie for a meal. but he rejects her further charity to embrace him back into her luxurious patronship. it totally neglects the core spirit of the novel and its severe philosophy of life's crude grimness which rots everyone, carrie for vanity and desire, hurstwood for cracked pride...etc. the movie interpretation is naive beautification to smoothen it into a tragic romance, hurstwood becomes a noble gentleman distressed in ill fate, and carrie is a simplistic ingenue with pious faith in love. in the novel, carrie is complicated with peacockish naivety and knee opportunitism which guide her into being a dishonorable mistress trading herself for the extravagenza. hurstwood under dreiser's pen is a duplicious liar who methodically guiles carrie with the complacency to flatter himself with the affair of a young lad, and he cannot take defeats well so he shuns away from frustraction with no backbone, a complete loser demised without name, title, not even a bit concern from carrie. hollywood is alsways inclined to capsulate literature with sugary romanticism despite the grittiness in the original work, same with "a place in the sun" which is dreiser's another masterpiece sweetened by the studio that transpires into another tear-jerking melodrama. only olivier's performance is worthy of praises for his dignified suaveness, but the whole flick is literarily written for him, isn't it?

[font=Century Gothic]"Carrie"(1952) is based on the novel "Sister Carrie" by Theodore Dreiser. It starts at the turn of the century as Carrie(Jennifer Jones) is leaving Columbia City, Missouri to make it big in Chicago. But the only work that Carrie can find is working long hours in a sweat shop making shoes. After she is fired because of an industrial accident, she goes in tears to Charles Drouet(Eddie Albert) looking for work.(Drouet is a successful salesman who she met on the train from Missouri. But to be honest he's quite a cad.) Carrie agrees to dine with Drouet at a swanky restaurant where she catches the eye of the respected manager, George Hurstwood(Laurence Olivier).[/font] [font=Century Gothic][/font] [font=Century Gothic]"Carrie" is a very poignant movie but never sappy. It is extremely well-acted, especially by Olivier playing one of his most complex characters. This movie is surprisingly mature for the time it was made. It concerns itself with sexism, gender relations and working conditions. Actually, it does come very close to social realism in places. Plus, for a movie set in the past, it is not in the least nostalgiac. The movie's only faults is that it is unrelenting and the ending is not that believable.[/font]