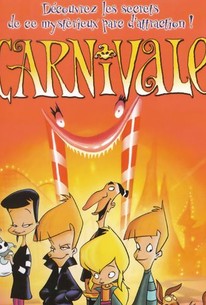 In this animated family story, a group of children are playing at the beach when they pass through a mysterious window in time. They find themselves transported back to an amusement park from the early part of the 20th century, and they have a grand time playing with the puppets and fooling each other in the House of Mirrors. Before long, the kids are ready to go home, and they find out that it isn't as easy as they thought; what's more, if they can't get out within a few hours, they'll be trapped there forever and turned into exhibits at the park. Carnivale was directed by Deane Taylor, who was art director for Tim Burton's The Nightmare Before Christmas; voice talent in the film includes Helena Bonham Carter and Hugh Laurie.

There are no critic reviews yet for Carnivale. Keep checking Rotten Tomatoes for updates!

There are no featured reviews for Carnivale at this time.