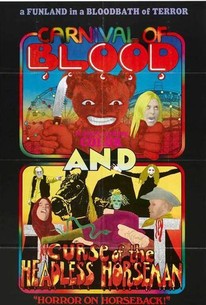 Death stalks Coney Island, as an anonymous killer is targeting women on the boardwalk and tearing them to shreds without leaving any obvious clues. Assistant D.A. Dan (Martin Barolsky) decides to investigate, and drags his fiancee Laura (Judith Resnick) along with him despite her fears. They visit Laura's friend and neighbor Tom (Earle Edgerton) who runs a dart game booth at the carnival with his hunchbacked sidekick Gimpy (Burt Young, appearing here under the name John Harris), then question a gypsy fortune teller who has predicted the deaths of each victim while reading their tarot cards. The murders continue, each victim visiting both Tom's booth and the gypsy before their death, and all found later missing vital organs. When Dan discovers a teddy bear stuffed with human offal in the prime suspect's apartment, he must race against time to save Laura from meeting the same terrible fate as the killer's previous victims.

Critic Reviews for Carnival of Blood

There are no critic reviews yet for Carnival of Blood. Keep checking Rotten Tomatoes for updates!

Audience Reviews for Carnival of Blood

It's a bad flick, but it's got spunk, and watching it late at night the cheap way and extremely odd way it was done really fucking gave me the creeps. One of the first films in a while that got under my skin so much that I had to watch of a bit of Conan before bed. How lame do I feel.