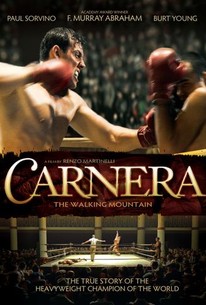 Standing six and a half feet tall and weighing 265 pounds, Primo Carnera was one of the most formidable opponents in the history of heavyweight boxing, and in 1933, after becoming heavyweight champion of his native Italy, we went on to defeat Jack Sharkey in New York to become heavyweight champ of the world. Carnera's true story comes to life in this screen biography, with "the Ambling Alp" played by actor Andrea Iaia. Growing up in poverty, Carnera wanted to use his size and strength to make something of himself, and after joining a circus and becoming a strongman, he was spotted by a pair of fight promoters, Leon See (F. Murray Abraham) and Lou Soresi (Burt Young), who were convinced he had the talent to become a professional boxer. In time, with the help of trainer Maurice Eudeline (Paolo Seganti), Carnera rose to the top of the fight game and became an international sports star. However, Carnera's business savvy didn't match his physical power; he discovered in his later years that See and Soresi had stolen most of his winnings, and the once-proud champion was forced to join the then-unglamorous world of professional wrestling. Originally produced for Italian television, Carnera: The Walking Mountain enjoyed a theatrical release in Europe before its broadcast premiere. ~ Mark Deming, Rovi

There are no critic reviews yet for Carnera: The Walking Mountain. Keep checking Rotten Tomatoes for updates!

There are no featured reviews for Carnera: The Walking Mountain at this time.