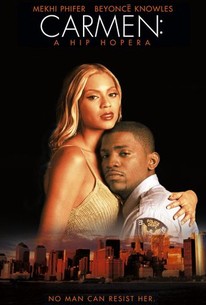 Previously, and brilliantly, adapted as an opera by Georges Bizet, the Prosper Merimee novel Carmen served as the inspiration for this updated made-for-cable movie. Set in contemporary Los Angeles, the film stars Beynoce Knowles of Destiny's Child as the seductive Carmen, no longer an employee in a cigarette factory but instead an aspiring actress. The "Don Jose" character has become a cop named Sgt. Derek Hill (Mekhi Phifer), who after being ordered by his corrupt superior officer Frank Miller (played by rapper Mos Def) to arrest Carmen for her involvement in a bar fight, falls hopelessly--and tragically--in love with her. After leading Hill down the path to perdition, Carmen deserts him, not out of love for bullfighter Escamillo but for a top-40 rap star named Blaze (Casey Lee). Although the familiar Bizet melodies are heard as linking music, the main musical score is a complete original, composed by Kip Collins. MTV's Hip Hopera: Carmen first aired over the titular cable network on May 9, 2001.

Da Brat
as Narrator
View All

A refreshing movie with plenty of solid performances and catchy rap numbers.

AWFUL. AWFUL. AWFUL! Just AWFUL! Everyone knows this was just an excuse for Beyonce to be the center of attention. A a child growing up as a Destiny's Child fan could appreciate this "musical," but once she grows up and sees this film in all its cheese-tastic glory, she'll see it as a terrible "hip-hop" knockoff

Beyonce Knowles and Mekhi Pheifer are believable in this classic love story with a hip-hop twist. See this whether you are a hip hop & R&b fan or not...It is a rare treat.