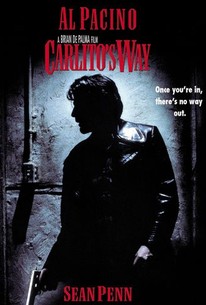 Critics Consensus: Carlito's Way reunites De Palma and Pacino for a more wistful take on the crime epic, delivering a stylish thriller with a beating heart beneath its pyrotechnic performances and set pieces.

Critics Consensus: Carlito's Way reunites De Palma and Pacino for a more wistful take on the crime epic, delivering a stylish thriller with a beating heart beneath its pyrotechnic performances and set pieces.

Critic Consensus: Carlito's Way reunites De Palma and Pacino for a more wistful take on the crime epic, delivering a stylish thriller with a beating heart beneath its pyrotechnic performances and set pieces.

Carlito's Way is a tale of a former hood trying to escape his former life. Al Pacino is Carlito Brigante, a high-level Puerto Rican drug dealer sprung from a three-decade jail sentence after only five years, thanks to a technicality and his sleazy, cocaine-addled lawyer, Dave Kleinfeld (Sean Penn). Carlito renounces his previous ways and takes a job as the manager of a club that Kleinfeld has invested in, planning to save enough money so that he can eventually move to the Caribbean. But no sooner is Carlito back on the streets of New York than his old life claws at him in the form of both old partners (Luis Guzman) and vicious up-and-comers (John Leguizamo). Nevertheless, Carlito stays clean and even restarts his relationship with a dancer named Gail (Penelope Ann Miller), until he is finally led astray by Kleinfeld, who manipulates Carlito into participating in the murder of a Mafia don from whom Kleinfeld has stolen a million dollars. At that point, the race is on to see whether Carlito and Gail can escape his world for good. The film is based on two novels about Carlito written by New York State judge Edwin Torres.

Gregory Misciagno
as Italian at Copa

John Ortiz
as Guajiro
View All

Penn, in curled hair and wire-rims, makes a brilliant, slippery high-end shyster; his modulated hysteria is amazing. So is Brian De Palma's direction.

Pacino looks every inch a movie star, and De Palma provides a timely reminder of just how impoverished the Hollywood lexicon has become since the glory days of the '70s.

"Carlito's Way" is best watched as lively, colorful posturing and as a fine demonstration of this director's bravura visual style.

About halfway through, the overwhelming fact that the movie is a complete nothing becomes too much to ignore.

Pacino has his moments but for the most part he's surprisingly underwhelming. He's a great actor but even I can do a better Puerto Rican accent.

"Carlito's Way," like "Scarface," is first and last a character study, a portrait of a man who wants to be better than he is.

The film's somber mood is balanced only by its larger-than-life performances, retro '70s threads, thrilling sequences, and plenty of sweaty disco tunes outside of Patrick Doyle's stellar score.

You expect a fine performance from Pacino, and, with hopeless, hollowed-out eyes, he gives it. You expect the worst from Sean Penn. But, here, he's a hit.

Although still distinctly sleek a la de Palma, it's the rare instance in which romantic optimism & warm, careful character observation trump his penchant for coolly detached cynicism. It's not nihilistic, fetishistic or misogynistic. It's humanistic.

Perhaps the last great DePalma film, using his trademarks well but not overusing them.

Beautifully shot and extremely well acted, Carlito's Way is not only a great crime movie but is also a tragic story of redemption, as one man tries to escape the ghost's of his past and start again.

De Palma's electric set pieces are peppered throughout a faltered narrative, but Pacino and Penn hold it all together exceptionally well.

A decade after they lit the place up with Scarface, Brian De Palma and Al Pacino reteam for another compelling crime drama involving the drug trade- a gripping film that shows the consequences of a life of crime from a much more real and gritty perspective point of view than Scarface. Not that Scarface is a bad movie, it's a great film, but this one is just more human. Carlito "Charlie" Brigante has just been released from prison after serving 5 years of a 30 year sentence thanks to the work of his scheming and smarmy lawyer Dave Kleinfeld. Now that he's out, Carlito decides to go the straight and narrow, and cut ties with his old life. He's got big dreams ahead of him, and, noble as they may be, he finds it hard to completely let go of the past. As I said above, it's a very human film, and it goes for the heart as much as it does for the throat. Yeah, the film has shades of familiarity (what film doesn't?) but it's very well played. De Palma tones down some of the manic camera work, and there's no split screen, but we do get some good long takes and tracking shots, and that typical feeling of being inside the event of the film that he's known for doing. It's a gorgeous picture, and you truly get immersed in Carlito's world. It's set in the 70s (I believe, as the film doesn't make it too obvious, but it feels like that's what they're trying for), and the details, though subtle, are nice. This could have been more overt, but they went for restraint, and that makes the picture a lot stronger I think. It's also got some terrific performances. Pacino once again stuns as Carlito, and I dig the beard he brings with his accent. Sean Penn is tremendous as Kleinfeld, and he's the kind of coked-out worm you love to hate. Luis Guzman and John Leguizamo provide some decent supporting performances, and Penelope Ann Miller is fine as Carlito's old/rekindled flame Gale, but the real treat acting wise is the brief cameo from a young and barely recognizable Viggo Mortensen as an old wheelchair-bound associate of Carlito's. It's a truly remarkable appearance. All in all, this is a wonderful film. It's long, but it doesn't feel like a chore. You get to know the characters and world, and you really try to root for them and hope that a more mature perspective on the world will yield better results. Definitely give this one a shot. Truly one of De Palma's finest.

One of the best crime dramas of the 90's. Excellent Gangster Film! Carlito's Way (1993), is a brilliant cinematic work. Pacino's performance as Carlito Berganzi displays the duplicity and subsequent torment between his reformed spirit, and the endless seduction of the street, embodied more specifically as his reputation,legacy,those who know him, of him, and those whom he allows in his innermost circle. Sean Penn is phenomenal as the lawyer representing Carlito, his metamorphosis into character is testament to his depth of talent. Penelope Ann Miller, as the long-suffering love of Carlito's life is dramatically and visually enchanting. The casting is perfect. The supporting cast superb, perfectly augmenting the film. The script is alive with literary devices, the story line(s), characters, dialogue, themes, sub-texts,etc., make this an almost endlessly watchable film. This is by far one of Pacino's best movies in his career and he should've definitely at least been nominated for an Oscar. Definitely worth to be in your collection if you're a fan of crime dramas or gangster flicks. A Puerto Rican ex-con pledges to stay away from his former drug dealing ways but finds himself being dragged back by his past connections and the naive machinations of his lawyer and best friend. Hoping to raise enough money to get away from New York, Carlito Brigante takes on the job of running a nightclub, renews an affair with a dancer but old associates and old instincts suck him back into a world of violence and mistrust.

Carlito: I don't invite this shit, it just comes to me. I run, it runs after me. Gotta be somewhere to hide.  "He wanted out. He'd do anything to get there." On one hand I love Carlito's Way for the performances from Pacino and Penn, for De Palma's signature touch of violence, and for how the story progresses on the back of its characters. Still, I can't help feeling like this isn't as good as it should be. It's good, but far from being an amazing film. With the talent in front of and behind the camera, I just always expect more. But still as it is, it is still a pretty fantastic piece of the Crime Drama genre. It doesn't reach the point of De Palma and Pacino's Scarface, but it is better than 90% of the other movies that try to do a story like this. Carlito has just been released from prison where he was serving a thirty year sentence. Instead, he is released after just five because his lawyer, Kleinfeld was able to get him off on a technicality. Carlito expresses right from the out set that he wants to be done with the gangster scene. All he wants to do is make some money so that he can move down to the Bahama's with his girlfriend Gail. Things don't go that perfectly though as his friends are constantly bringing him back into the gangster scene. The film is very character driven, but as the plot progresses, it leads to an extremely suspenseful final twenty minutes. De Palma just knows how to shoot amazing scenes on stairs in train stations. The one here resembles the one in The Untouchables to a high degree.  The movie is weakest when the narration is going on. The dialogue for it doesn't seem to fit in with the rest of the movie. It just feels very awkward and even silly. Whenever I hear the voice over come on, I just wish that it wasn't in the film, or at least cut down a little. Carlito's Way does have some amazing scenes as you would expect from De Palma. I already mentioned the scene in the train station. But the best scene in the movie is the first time we see Carlito pulled down into crime. He goes on a drug pickup with his cousin. The pickup doesn't go very well and a lot of shooting ensues. It all is capped off by one of the coolest little speeches ever. While this isn't a masterpiece, it is still a worthwhile film for sure. De Palma has made better movies than this, but it still shows a lot of what makes him great. It is hard to watch this and not compare it to Scarface, but you should probably try your hardest not to. Carlito: I'm reloaded! Okay? Come on in here, you motherfuckers! Come on, I'm waitin' for ya! What, you ain't comin' in? Okay, I'm comin' out! Oh, you up against me now, motherfuckers! I'm gonna blow your fuckin' brains out! You think you're big time? You gonna fuckin' die big time! You ready? HERE COMES THE PAIN!