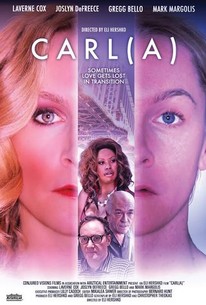 "Carl(a)", starring Laverne Cox, and Joslyn DeFreece is the story of a trans woman who is being rejected by her family while seeking the means to complete her transition. At the same time Carla meets Sam (Gregg Bello), a man who loves her for who she is. However when Carla obtains the means to complete her transition Sam has second thoughts about their future. Now Carla must choose between being true to herself, or being someone she isn't for someone else. The film also stars Mark Margolis. The film directed by first timer Eli Hershko opens throughout the country in limited release on December 10th and is being distributed by Ariztical Entertainment.

Director Eli Hershko and co-writer Christopher Theokas do a nice job with the relationship between Carla and Grandpa, but the other roles go underdeveloped. The filmmakers are even less successful with plotting, telegraphing every major turn.

Ultimately, Carl(a) wins me over for refusing to completely become a fairy tale, yet at the same time offering its main character some semblance of hope for future happiness.

There are no featured audience reviews yet. Click the link below to see what others say about Carl(a)!