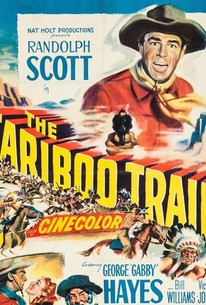 Set in British Columbia but filmed in Colorado, Cariboo Trail stars Randolph Scott as a cattle-drive boss from Montana. Crooked Victor Jory and his minions stampede the cattle, causing Scott's partner Bill Williams to lose an arm. Out of a job, Scott gives gold mining a try, but even here he is tormented by Jory. The villain is hoist on his own petard when he tries to stir up the local Indian tribes. Proving that the good guys don't always win, Scott gives up mining and turns to cattle ranching. ~ Hal Erickson, Rovi

Dale Robertson
as Will Gray

Critic Reviews for The Cariboo Trail

The film is held together by the resolute performance by Randolph Scott.

There are no featured reviews for The Cariboo Trail at this time.