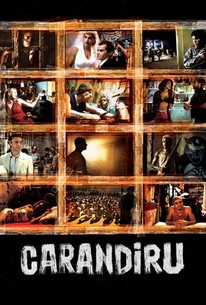 In a cell inside São Paulo's House of Detention, better known as Carandiru, two inmates have a score to settle. The atmosphere is tense. Another inmate, Black Nigger, a kind of "judge" for settling disputes among prisoners, solves the case in time to welcome the Doctor, who has recently arrived--eager to begin an AIDS-prevention program in the penitentiary. The Doctor is faced with extremely serious problems inside this place, known as Latin America's largest jail: overcrowded cells, decaying facilities, diseases such as TB, leptospirosis, cachexia, and the beginnings of an AIDS epidemic. The inmates have access to neither medical care, nor legal assistance. Carandiru, with upwards of seven thousand prisoners, is a huge challenge for the newcomer. But after working there for a few months he perceives something that will transform him: the inmates, even in this appalling situation, are not demonic figures. In his daily contacts with the prisoners who see him in his makeshift office, the Doctor witnesses solidarity, organization, and above all, a great will to live.

Gero Camilo
as No Way

Rita Cadillac
as Herself

We know the massacre is going to happen from the off, and yet, despite this, the tension doesn't build much, perhaps because the film is over-long.

The movie has a tactile reality. You can almost smell it.

Has moments of raw, unflinching power.

Despite its structural flaws, Carandiru presents more interesting characters than you'd see in a dozen other prison movies.

Babenco brings the place and the prisoners alive.

"Carandiru" is a soulful movie that eschews glamour and formula to present a thoughtful meditation on an endemic prison reality that reaches far beyond the confines of the richest city in South America.

Carandiru could have been a great prison drama, but it mixed its genres so thoroughly in an attempt to make it entertaining and accessible that I felt it lost its bite.

Humanity struggles out from under a maximally oppressive system, commenting by haunting metaphor on life outside the prison walls.

A searing expose of conditions in the Brazilian penal system.

...most successful as a anthropological primer on the makeshift societies men erect under duress

No matter how contrived the format seems at times, every one of the hard-luck tales is violently good pulp.

It may be interesting as a collection of chronicles about life in a Brazilian prison, but sadly this is a frustratingly superficial and simplistic film that doesn't discuss the actual causes of the revolt that led to the Carandiru massacre, being also uneven and full of awful talking heads.

A breathtaking film, that talk about prisoners with AIDS, life in prison, prejudice and homosexuality. All seen by the doctor Drauzio Varella. A true story based on the book EstaÃ§Ã£o Carandiru. Shocking!

This is worth all 2 hours and 28 Minutes of your time. The best movie I've seen in a while and one of the top's when it comes to English Subtitles. This movie is in Portuguese Language so you will have to follow along the subtitles if your knowledge of that language is as limited as mind. This is a collection of life?s in a prison in Brazil, thru the life of a doctor from that prison. This movie should be watched by everyone that?s in a jail or prison in the US, just to see how good you have it here. This movie kept me glued to the screen. I have no idea how this movie got on my list, where I read the review or saw the preview, but I am glad I did. Its a must see and outstanding movie, NOT A DOCUMENTRY, a good movie. 5 stars and I haven't given that out in a while.

the story of a bloody riot in the largest jail in latin america begins with interesting back stories on many of the prisoners. we're drawn in by the characters and the inevitable climax is pretty shattering. manipulative but watchable