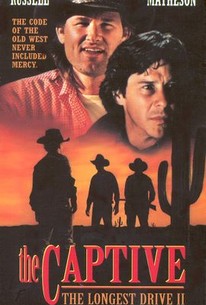 This western is the second half of a television series pilot for The Quest, and chronicles the further adventures of two brothers who have only recently found each other after one of them was raised by the Cheyennes who kidnapped him as a boy. The two decide that the Indians are still holding their sister hostage and so set out to find her. Their search is interrupted by a needy woman and her little boy.

Critic Reviews for The Captive

There are no critic reviews yet for The Captive. Keep checking Rotten Tomatoes for updates!

There are no featured reviews for The Captive at this time.