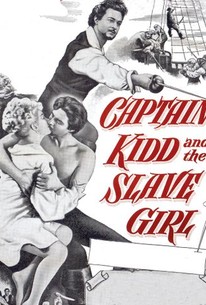 Anthony Dexter, who had essayed the title role in the 1951 biopic Valentino, plays a beardless Captain Kidd. Eva Gabor, who would later costar with Arnold the Pig on TV's Green Acres, is the slave girl. Gabor has been dispatched by the villains to seduce Kidd and determine the whereabouts of the pirate's legendary buried treasure. She falls in love with him instead, standing by his side as he fights his way through reels and reels of stock footage from old Hollywood swashbucklers. Captain Kidd and the Slave Girl was produced by Edward Small--and is "small" in every sense of the word.

James Seay
as Earl of Bellomont

Critic Reviews for Captain Kidd and the Slave Girl

There are no critic reviews yet for Captain Kidd and the Slave Girl. Keep checking Rotten Tomatoes for updates!

Audience Reviews for Captain Kidd and the Slave Girl

Slipshod balderdash obviously made on the cheap is unmemorable unless you are interested in seeing a young and very beautiful Eva Gabor or the Skipper from Gilligan's Island in his early days. Anthony Dexter's beard is beyond fake and distracts anytime he is on the screen.

When I saw the title of this movie I didn't think I would watch it for more then 20 Minutes, I was wrong very wrong MGM has released this under there Limited Edition Series, But film openings show it being a United Artist Picture. Made in 1954 with a host of actors and actresses. Anthony Dexter Plays Captain Kidd and Eve Gabor is the Slave Girl. Also in the movie is Alan Hale Jr (Gilligan's Island Captain), and the mighty fine Sonia Sorrell playing Anne Bonney ( Sorrell on played in one other movie 17 years later in Harold and Maude. This film is about Captain Kidd being caught and hanged but he isn't dead and those in charge set him up to follow him back to his buried treasure. We see all the antics along the way, including putting up with Eva Gabor who couldn't be a slave girl if she tried. Still its a great classic, and anyone who enjoys those old Black & White Movies shouldn't miss this one. 4 Stars.