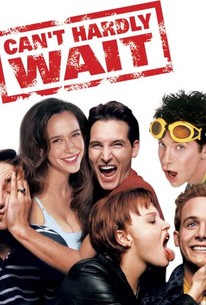 Jenna Elfman
as The Angel

Sean Patrick Thomas
as Jack No. 2

Freddy Rodriguez
as Jack No. 3

Joel Michaely
as X-Phile No. 1

Jay Paulson
as X-Phile No. 2

Branden Williams
as Homeboy No. 1

Bobby Jacoby
as Homeboy No. 2

Jaime Pressly
as Girlfriend No. 1

Tamala Jones
as Girlfriend No. 2

Jennifer Lyons
as Girlfriend No. 3

Nicole Bilderback
as Ready to Have Sex Girl

Leslie Grossman
as Ready to Have Sex Girl's Friend

Selma Blair
as Girl Mike Hits on No. 1

Jennifer Paz
as Girl Mike Hits on No. 2

Breckin Meyer
as Lead Singer in the Band
View All

Fortunately, some of the appealing young performers -- who include Ethan Embry, Charlie Korsmo, Lauren Ambrose and, especially, Seth Green -- manage to emerge from the film's generic suburban-teen backdrop.

There are signs that Can't Hardly Wait once had more serious aspirations... But in the final edit, at least, it's the dumb, broad slapstick that prevails, short-circuiting identification with the characters before it can begin.

The majority of the film is mired in magazine cliches and tired gags. Oh, look, the foreign exchange student only knows how to say he's a sex machine, haw! And the nerd's getting drunk! Hoo!

The film deserves credit, both for its breezy pacing and its uncommon tendency to make its characters smarter and geekier than they might have been.

This formula teen flick has engaging performances and a few laughs.

What's best about Wait are the bright turns by its young cast.

Flat characters are stuck in underdeveloped situations in this attempt by first-time directors Deborah Kaplan and Harry Elfont to recapture the mood of a John Hughes 1980s teen comedy.

This charmless and predictable teen comedy is packed with tired, second-hand ideas that render it wholly uninspiring.

It's mostly broad comedy. Not that there's anything wrong with that, just that it's all been done before.

Youth may be wasted on the young, but it's a drop in the bucket compared to the time wasted pandering to them.

Decent Teen comedy, but nothing ever great, Can't Hardly Wait is one of those films that could have been better, but still has enough charm to really make it a fun film to watch. The film is quite forgettable, but manages to be fun for the time you're watching it. However it does not stand out among other Teen comedies. Can't Hardly Wait is mindless fun, but lacks anything to really make it memorable. For what it is, it works, but is far from films like Ferris Bueller's Day Off. The film could have been much better and though is fun entertainment, it never becomes anything but mindless and sometimes dull entertainment. I think this film could have been reworked significantly to make it a much better film, and it's a shame that the film is never anything truly good or memorable. The film is simply a decent viewing. The film has some good gags, but most of the time, they fall flat and don't go nowhere. If the script would have been more developed and some parts would have been recast, then maybe this film would have been better. As a whole, the film offered some laughs, but I just felt that the story lacked too much, and really didn't offer anything new to the genre. Despite this fact, this is a fun, mindless film that has its moments despite the fact that it's a decent teen comedy. I didn't hate the film; I just feel it could have been much better. If you're looking a mindless entertaining ride, Can't Hardly Wait is worth seeing, just don't expect anything great with this film. The film does provide good laughs even if it's not a classic by any means.

Let's face it: though we all grew up with this genre, and love the gems such as Dazed and Confused and 10 Things I Hate About You, there are films trying way too hard. One of these nineties underachievers was Can't Hardly Wait, a title that already exacts a feeling of bland indifference, which is what you feel when you watch it. There are some pretty funny moments, but they're most on account of Seth Green, because he's so pathetically human, and Charlie Korsmo: If his face looks familiar, it's because he played Robin Williams' son in Hook, and strangely puberty has not lent a helping hand. He's the most nerdy, drunken, kooky figure during this intensely raging high school graduation party, and the most enjoyable character of the entire film. Threading through the shifting comedy are the subplots of an unrequited love between nobody Preston (barely showing up onscreen throughout this film) who has, quite literally, no discernible character traits, and a popular girl. We also get an eyeful of a youthful Jennifer Love Hewitt, a pre-Twilight Peter Facinelli, and a long list of cameos, including Selma Blair, Jason Segel, and Melissa Joan Hart as a peppy girl obsessed with everyone signing her yearbook. It didn't make a lot of headway, and was in no way original, but I did really enjoy the side story of Green and Ambrose's characters and their past, though under scrutiny it doesn't make much sense or matter.

I've seen much better teen films, any 80s teen film for example. This movie has a bunch of bad actors, and it's not funny. I didn't care for it.

It stagnates quite a bit, and J Lo Hew does pretty much what she always does (stand there), but there were some stories that stood out. Notably the Denise one.