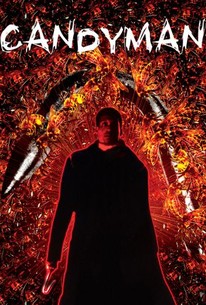 Critics Consensus: Though it ultimately sacrifices some mystery in the name of gory thrills, Candyman is a nuanced, effectively chilling tale that benefits from an interesting premise and some fine performances.

Critics Consensus: Though it ultimately sacrifices some mystery in the name of gory thrills, Candyman is a nuanced, effectively chilling tale that benefits from an interesting premise and some fine performances.

Critic Consensus: Though it ultimately sacrifices some mystery in the name of gory thrills, Candyman is a nuanced, effectively chilling tale that benefits from an interesting premise and some fine performances.

Researching urban folklore, a University of Chicago student snoops around the housing projects of Cabrini Green to find more about the legend of the Candyman who supposedly appears (whenever one looks into the mirror and repeats his name five times) to slash his victims with a metal hook. Only after she witnesses the atrocities herself, does she believe he exists. To her horror, he wants her to join him in his afterlife dimension. This unsettling feature is based on a short story by Clive Barker.

Kenneth A. Brown
as Castrated Boy

Michael Wilheim
as Priest
View All

Candyman offers a plot riddled with narrative ambiguities that are never fully resolved, all as a spur to the hooked viewer to spread their own take on the Candyman myth, and so to keep it alive.

Candyman is an uppper-register horror item that delivers the requisite shocks and gore but doesn't cheat or cop out.

Like so many post-Val Lewton horror films, this 1992 feature starts out promisingly while the plot is mainly a matter of suggestion, but gradually turns gross and obvious as the meanings become literal and unambiguous.

One of the best sustained horror movies for some years.

The film's spooky atmosphere is accentuated by Anthony B. Richmond's cinematography and Philip Glass's score.

Madsen is a much better actress than is usually found in such a role. However, if you don't like splashes of blood or bees swarming out of bodies, you may want to think twice about this one.

Candyman has an interesting premise. It just works under its atypical treatment of cliches. But a good movie? I don't think so. [Full review in Spanish].

Bernard Rose's Candyman offers a moody "elegance", if you will, that's sorely lacking in other horror films of the era.

An urban horror allegory about the white guilt people feel standing on the outside looking in, encountering worse horrors after invading places where they just don't belong.

Give Candyman hosannas for offering an intriguing premise, but then give it hell for not following through on its initial promise.

Candyman stands up to the test of time and it feels even more prescient today. It had the guts the explore race relations within the context of horror without resorting to stereotypes or moralizing while still remaining scary and engaging.

An eerie, scary and surprisingly efficient horror film that invests in an atmospheric score and an intriguing mystery about a living rumor who can only be real through his spooky legend - and it firmly keeps its roots in the real world while the gore never feels unnecessary.

Adapted from the chilling mind of Clive Barker, "Candyman" is much more than a story about an urban legend turned serial killer. Barker looks at the everyday, the mundane, and twists it into submission. He doesn't believe in the suburban, or the normal. Through the clichés he sees the gruesome world of dreams, the outer membrane that surrounds us all, and from that he cultivates a horror tradition that lends itself to the grotesque. In this film, his tensest buildup to date, he shows martyrdom in the face of evil. Virginia Madsen is a graduate student who searches for the legendary Candyman in the ghetto of South Chicago, inevitably finding him. The story revolves around her seduction, and eventual sacrifice for the good of the community. The film is great for the fact that it builds up its villain, and also sets a mood unlike other horror films. The seduction mirrors the old "Dracula" films, and yet is much bloodier for the benefit of slasher fans, bridging traditions and creating a terrifying narrative where the boogeyman is real.

Candyman: They will say that I have shed innocent blood. What's blood for, if not for shedding?  "We Dare You To Say His Name Five Times!" I've seen Candyman two times now. The first time I was a much younger person and didn't see the many flaws that do exist within this urban legend horror film. On a second viewing, I still enjoyed it, but there were some huge flaws I just couldn't get over. This is a movie that is sort of hard to judge. It's simultaneously laughable, but well made. It's simultaneously stupid, but genius. There's a lot of great stuff going on in the movie, but there's also an equal amount of terrible stuff going on as well. The film had the potential to be nearly a top tier horror film, but unfortunately it isn't. It will always be regarded as a classic and that's fair, but it will never and should never be called a great film. We've all heard about Bloody Mary and saying her name in the mirror. Well, this is the same thing, but with a son of a slave called Candyman. If you say his name five times in a mirror, he appears behind you and... well, you know what happens. On another note, I loved the South Park parody of this, in which they used Biggie Smalls as the guy who appears when his name is said in the mirror. The movie follows a woman who's working on a thesis regarding urban legends. She stumbles upon some stuff on Candyman and her work takes her into dangerous and terrifying situations.  Far from perfect, far from awful; this movie just happens to be a well known, but plainly average horror film. The movie certainly has its moments. There are scenes that work extremely well. The music is creepy and awesome, and overall the film as a whole is a lot of fun. I think most people could agree with me though, that it just all doesn't come together as well as we would hope.