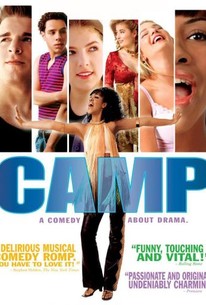 Critics Consensus: Campy comedy that squeaks by on its charms.

Critics Consensus: Campy comedy that squeaks by on its charms.

Critic Consensus: Campy comedy that squeaks by on its charms.

Tony-nominated actor Todd Graff makes his directorial debut with the musical comedy Camp, featuring an ensemble cast of newcomers. Guitarist Vlad (Daniel Letterle) attends Camp Ovation, the summer theater camp for budding actors, dancers, and musicians. Finding himself to be one of the only hetero boys around, he soon befriends nice girl Ellen (Joanna Chilcoat). Meanwhile, openly gay Michael (Robin de Jesus) develops a crush on him. This sparks dramatic confrontations among fellow campers Jenna (Tiffany Taylor), Jill (Alana Allen), and Fritzi (Anna Kendrick). The whole camp is run by Bert Hanley (Don Dixon), a washed-up Broadway songwriter who decides to enlist the help of his young campers to put together a new production. Features musical numbers by Stephen Sondheim and the Rolling Stones, as well as original tunes from composer Michael Gore and lyricist Lynn Ahrens. Camp was nominated for the Grand Jury Prize at the 2003 Sundance Film Festival.

Stephen Sondheim
as Himself

Matthew Snyder
as Saxophone/Clarinet
View All

Camp may not be as slick as Fame, but it's twice as funny and loads more honest.

A poor man's Fame. If you can live with that, it makes for a somewhat entertaining experience.

Fame may seem silly in retrospect, but Camp, with its dippy dialogue and characters revealing even less complexity than the ones from 42nd Street, arrives silly.

There's something irresistible about this teenybopping hoofer.

You'll have trouble keeping your toes from tapping.

Camp is all about the cathartic joy of performing. Fearlessly wearing its heart on its sleeve, it's the anti-Fame, and I think it has legs.

Todd Graff, better known as writer, makes a decent (but no more)directing debut with this mildly amusing but unoriginal indie about a bunch of gays and heteros putting on a show.

One doesn't have to be a theater queen to appreciate Camp's humor, but it wouldn't hurt.

So chock-full of insider theater references that the film reads like a trivia contest held in the Acapulco Room on a cruise sponsored by Broadway.com

Lying somewhere between Fame and Meatballs, Camp unfortunately possesses neither the energy of the former nor the hilarity of the latter.

Cast: Don Dixon, Anna Kendrick, Daniel Letterle, Joanna Chilcoat, Robin de Jesus, Steven Cutts, Vince Rimoldi, Kahiry Bess, Chris Spain, Sasha Allen, Alana Allen, Egle Petraityte, Dequina Moore, Stephen DiMenna, Tiffany Taylor, Stephen Sondheim Director: Todd Graff Summary: Camp Ovation is a performing arts summer camp where talented kids come to spread their wings. Among them are Vlad (Daniel Letterle), a "bona fide straight boy"; Ellen (Joanna Chilcoat), a megastar with huge insecurities; and Michael (Robin de Jesus), who's struggling with his sexual identity. Their director, Bert Hanlon (Don Dixon), is a washed-up has-been -- but the kids have at least as much to teach him as he has to teach them. My Thoughts: "I was a bit surprised on how bad some of the acting was considering what the film is about. Although it got a bit boring and definitely had quite a few cheesy moments, I did find some of the movie funny. Anna Kendrick doesn't have much screen time, but you can tell that she out shined them all in the acting and it's no surprise she's doing so well now. Although the film isn't great it does tread on some serious issues for teens and their relationships with their parents. I felt awful for Michael and the one who had her mouth wired shut (forgot her name). I won't deny that there is talent in the movie, it's just the star doesn't shine as bright for some then it does for the others. The film in the end is forgetful."

I was rather bored watching it, but some of the cast has got some awesome talent. Letterle, Chilcoat, and Kendrick have amazing voices. But the movie was totally worth getting through to the end to see, I believe it was, Taylor sing at the end. That girl was SPECTACULAR!

This looked great on the previews. I was surprised I didn't actually enjoy it all that much. Acting okay, but not that interesting.

"You know, I think I've met your sister, Cinderella."

Five stars? Hell yes. For me, star ratings are kind of dependant on what a film sets out to achieve, so whilst this many not be an all-out masterpiece a la Hitchcock, Polanski, 'insert your favorite auteur here' etc etc., Camp accomplishes exactly what aspires to, delivers in spades, and is in my view very successful indeed.

A mixed group of talented kids go to drama camp for the holidays to act, sing and dance - for some, Camp Ovation is the only place where they feel they fit in - it's a place where they can escape, or follow ambitions, or reset their personalities, and subvert their own and others expectations of them. The characters, chief among them 'plain Jane' Ellen (Joanna Chilcoat), handsome, somewhat confused and attention seeking Vlad (Daniel Letterle), gay outsider Michael (Robin DeJesus) and talented Dee (Sasha Allen), are surprisingly well crafted for a modern 'musical', and the actors who portray them are a talented bunch of people (Robin DeJesus is particularly impressive, and Daniel Letterle gets to show he's more than a pretty face as the movie progresses).

Some may accuse the story of being predictable, but it has conviction and follows through with plot points that in lesser films would be forced to the background or kept as subtext. Director/Writer Todd Graff, drawing on his own experiences at a musical camp, displays a knack for one-liners and adolescent emotions (sexuality is especially well realised), and the musical numbers are very well staged.

Funny, perceptive, emotionally engaging and way better than I had expected it to be. Crank up your volume for the musical numbers.

"I tell you something. They're a bunch of little freaks... and the more normal we try and make them, the more lonely and isolated they're gonna feel."