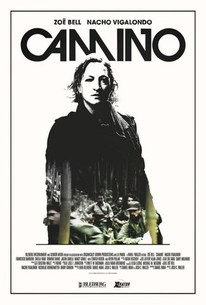 Set in 1985, war photographer Avery Taggert (Zoë Bell) has built a solid career with her stark and honest imagery, all the while remaining emotionally distant from her subjects. When she embeds in the jungles of Colombia with a squad of missionaries led by a beloved and charismatic Spaniard known as "El Guero" (Nacho Vigalondo), she finds herself in the middle of a conflict as violent as any she's photographed. One night, she happens upon El Guero committing a heinous atrocity, capturing the vile act on film, an image with the potential to discredit and destroy El Guero. Knowing this brilliant psychopath will employ every tactic at his disposal to destroy that photograph - and the photographer who took it - Avery flees into the harsh jungle with nothing but the camera hanging around her neck to escape from missionaries twisted into violent guerrillas by the madman intent on destroying all enemies.

Dalila Palacios
as Woman With Gun

A competent but unmemorable B-movie that eschews any real political content in favor of simple, brutal survival melodrama with scant room for surprises in plot, character or directorial style.

[Bell's] anticipated hand-to-hand encounters are ultimately beaten into submission by an irritating atonal score that constantly drowns any trace of nuance under an onslaught of shrill electronic sludge.

The real downfall of Camino is its script, which screenwriter Daniel Noah says was written into two days-and it shows.

It's worth watching for Bell's performance and some well-choreographed fight sequences, but you probably won't remember it a week after seeing it.

While it definitely could have benefitted by being about 15 minutes shorter, Camino is an admirable effort from director and co-writer Josh C. Waller, who effectively ratchets up the tension throughout his savage thriller to an almost frenetic pace.

Julia Bembenek
Under the Radar

The film is neither as serious nor as entertaining as it was trying to be. The road in CAMINO is one well-traveled.

A forgettable jungle chase flick that fails to play up to Bell's considerable strengths.

Bell manages to put a disarming amount of heart, emotion and pain into her performance... But the film fails to match Bell's performance.

This Noah/Waller picture, featuring stuntwoman-turned-actress-turned-stuntwoman Zoe Bell, is neither taxing nor terribly potent.

... jettisons any provocative exploration of its multicultural subject matter and devolves into a mindless ultraviolent bloodbath.

There are no featured audience reviews yet. Click the link below to see what others say about Camino!