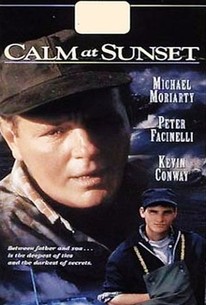 Filmed on location in Nova Scotia, the made-for-TV Calm at Sunset is a "generation-gap" story with an unusual twist. Instead of causing his family heartbreak by refusing to follow in his dad's footsteps, the protagonist disappoints his family by insisting on being just like his dad. Fisherman Russell Pfeiffer (Michael Moriarty) has always dreamed of a better and more prosperous life for his sons, and to that end bankrolls their college education. But while older son Joseph (Christopher Orr) is willing to seek employment outside the family's sphere of influence, 18-year-old James (Peter Facinelli) drops out of law school during his first year, intending to follow his dream of owning his own fishing boat. This dream is not only a source of grief for hard-working Russell and his wife, Margaret (Kate Nelligan), but may also prove so dangerous that James will never make it to age nineteen. Add to this a shocking family secret, and you have all the ingredients for a solid and entertaining Hallmark Hall of Fame presentation. Adapted from a novel by Paul Watkins, Calm at Sunset debuted December 1, 1996, on CBS.

Jeremy Akerman
as Reynolds
View All

Critic Reviews for Calm at Sunset

There are no critic reviews yet for Calm at Sunset. Keep checking Rotten Tomatoes for updates!

There are no featured reviews for Calm at Sunset at this time.