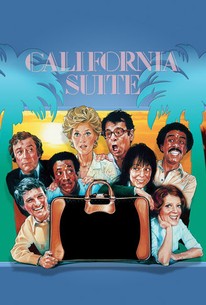 Neil Simon's hit Broadway comedy -- a sequel of sorts to his Plaza Suite -- enlists the same format of four distinctive sketches, this time set in the sun-soaked Beverly Hills Hotel. But Simon is texturing his stories with a darker veneer than the older sketches from Plaza Suite, with self-conscious and variable results. The first episode concerns Bill and Hannah (Alan Alda and Jane Fonda), a divorced couple who meet at a suite at the hotel to figure out who will get the custody of their child. Sidney Cochran (Michael Caine) and Diana Barrie (Maggie Smith) are a couple of pretentious movie stars who rent a suite while waiting the Oscar ceremony. Willis Panama (Bill Cosby) and Chauncey Gump (Richard Pryor), two black doctors, rent another suite at the hotel for a family vacation, all goes wrong, and they end up fighting with each other. In the final episode, Marvin (Walter Matthau) has to explain to his wife (Elaine May) why he's been found in the sack with a hooker.

Elaine May
as Millie Michaels

David Sheehan
as Himself

Jerrold Ziman
as Man on Phone

Bert May
as Waiter

Gary Hendrix
as Her Date

Christopher Pennock
as Cop
View All

Total Recall: The Heartbreak Kid and the Movies of Neil Simon
Get Ready for Another "Stir of Echoes"
Richard Pryor Passes Away at 65

Less than successful, veering from poignant emotionalism to broad slapstick in sudden shifts.

Means middle-class angst covered with a thin veneer of snappy one-liners and presented in the most anonymous directorial style imaginable.

Any movie which allows Jane Fonda and Maggie Smith to stalk through it like modern-day versions of Tallulah Bankhead and Gertrude Lawrence cannot be easily dismissed. They make California Suite seem like manna from heaven.

California Suite is the third script by Neil Simon that Herbert Ross shoots, and it's also his worst. [Full Review in Spanish]

At its best, Simon's dialogue is both entertaining and illuminating and it's at its best in much of this film.

The desperation of the director, Herbert Ross, is embarrassingly obvious in the Crazy Gang antics of this foursome.

For one of the acts in Neil Simon's stale anthology, Maggie Smith won a Supporting Oscar for playing a hard-drinking actress who complains to her bisexual husband (Michael Caine) that "Acting doesn't win Oscars. What I need is a dying father."

Rich Cline
Shadows on the Wall
View All Critic Reviews (23)

Neil Simon don't do a very good work, like another films written by he. The first hour, California Suite is nothing poignant. After, the movie get better, but the audience in that point don't want continue to watch.

Another all-star fiasco. This movie is supposed to be funny and dramatic, but it's in fact very boring and has very little humor. There are a couple of really funny scenes, but most of the time it isn't funny at all. The only real reason to watch this is to see all the famous actors.

The best latter duo (Richard Pryor and Bill Cosby) getting the worst break, however, as their seg is chopped up, spread around and generally given short shrift in this film.