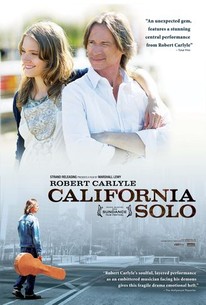 Robert Carlyle (The Full Monty, Trainspotting) stars in this touching, human story about post-fame life and personal redemption. Former Britpop rocker Lachlan MacAldonich (Carlyle) has settled into a comfortably numb existence just outside Los Angeles. By day, he works on an organic farm and travels regularly to the city's farmers' markets to sell produce. By night, he retreats to his crummy apartment to record "Flame-Outs," his podcast that recounts the tragic deaths of great musicians. The only spark in his humdrum existence is Beau (Alexia Rasmussen), a lovely struggling actress and amateur chef. One night, Lachlan gets pulled over for a DUI, a charge that dredges up his past drug offense and threatens him with deportation. Lachlan's only hope of staying in the U.S. is proving that his removal would cause "extreme hardship" to a U.S. citizen spouse or relative, so he contacts his estranged ex-wife and daughter, raising past demons that he must finally confront. Danny Masterson co-stars. Written and directed by Marshall Lewy.

A Martinez
as Warren

Heather Fowler
as Flashlight #4
View All

Lewy's script doesn't cop out with any sentimental redemption, but neither does it establish why the self-destructive Lachlan deserves our sympathy.

Mainly worth seeing as a showcase for the appealing Scottish actor Robert Carlyle, who plays a has-been rocker reduced to eking out a living on an organic farm in Southern California.

In some sense, "California Solo" is like meeting an engaging stranger: At first there's a certain air of enigmatic mystery that makes you want to spend time with them, but eventually things turn awkward and you just want to get away.

The story trickles to a disappointing close. But Carlyle, who first gained attention here for his unforgettable work in "Trainspotting," remains an essential character actor.

Even as California Solo plays like a track we've heard before, it's still worth a listen.

It treats its themes of guilt and responsibility with delicate tact and a precise eye for the neglected commitments that stubbornly dog a man trying his damnedest to efface himself from the world.

A melancholy portrait of a man forced to face significant demons from his past, imbued by the simple, sad, solo that is Carlyle's affecting performance.

Carlyle gives a nuanced performance--perhaps too nuanced, as the character's overall arc amounts to a blip of resignation.

It is not that the film is bad or boring so much as it is forgettable.

Clunky and lacks bite, but mostly engrossing thanks to Robert Carlyle's heartfelt, nuanced performance that adds complexity which the screenplay lacks.

Anchored by Robert Carlyle's strong, naturalistic performance, in which he relies on his big smile and sad eyes in equal measure.

No one has written a part for Robert Carlyle that gives him this kind of chance to show his range since The Full Monty. And that was 15 years ago.

Question: Have you ignored the consequences of your actions, especially when the initial result was so horrendous that you opted out and thought it was best to forget than face it? Burying the pain any way you can, you live a dark, disconnected existence that keeps you oblivious. Exile. However, if you believe in karma, your actions will be rebuked someday, when you probably least expect it, and you will finally be forced to lift the veil. The sight isn't pretty but once concessions are made the sun might shine again. California Solo quietly tells the tale of a former Britpop band member, played by Robert Carlyle, whose unspeakable actions over a decade ago brought his life to a screeching halt. Most should recognize the Scottish actor from his roles in Trainspotting, 28 Weeks Later or The Full Monty, but Carlyle portrays a man far different from those famous characters. Lachlan MacAldonich (Carlyle) is a deep character. His performance was touching, enigmatic and heartfelt. He's full of pain, regret and he can't seem give up the booze to look clearly at himself. The layers of this man were slowly exposed and left me with a quandary. In the beginning, he's just a farmer in southern California living a quiet life. Then he makes a stupid mistake and gets caught. Due to his current situation and past indiscretions, Lachlan is threatened with deportation back to Scotland. For the rest of the film his realities are revealed, smacked in his face actually, but he fights to continue his self-imposed exile. The level of empathy for the middle-aged man started off strong because he seemed like loner happy just being quiet and left alone. Yet, as you discover more about him and his past you become unsure how to feel. In fact, I went back and forth on whether I felt sorry for him. Marshall Lewy, the writer/director, had me trying to figure this character out, why his demons were so buried, and wondering about his desperation to not go back to the UK. The story is compelling, to say the least. I was almost hypnotized by Carlyle's character and his deep need to push back the demons that were obviously rising up. Lachlan didn't appear to have much to live for but get up, go to work, frequent the local bar and produce a podcast about dead rockers. Was that a good existence? For him it was, but it couldn't last forever as he soon found out. There are a few other characters in California Solo played by A Martinez, Kathleen Wilhoite, Alexia Rasmussen, and Danny Masterson. These are the few people in Lachlan's life but kept at arm's length - some further than others. All did a fine job in this indie film but Carlyle is the one to watch. California Solo is a film worth viewing. It is a haunting story that is a cautionary tale about accepting responsibilities for behaviors of the past. Hiding, sulking and ignorance will not heal the pain no matter how many years have come and gone. Review: 8 out of 10