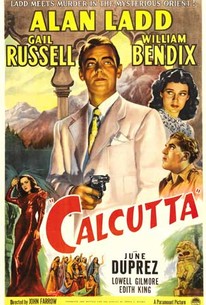 Alan Ladd stars in Calcutta as devil-may-care pilot Neale Gordon. With his equally fearless partners Pedro Blake (William Bendix) and Bill Cunningham (John Whitney), Gordon handles the air-freight route between Calcutta and Chungking. When Cunningham meets his death at the hands of jewel smugglers, Gordon vows to play judge and jury and bring the criminals to justice himself. Among the suspects are the film's two gorgeous leading ladies, sweetie-pie Virginia Moore (Gail Russell) and sultry nightclub singer Merina Tanev (June Duprez). Once Gordon figures out who his real friends are, he relies on his fists to mete out retribution, resulting in one sequence that's guaranteed to raise the hackles of every feminist in the crowd. Even with a short running time of 73 minutes, Calcutta secured top-of-the-bill bookings.

Joey Ray
as Bodyguard to Lasser

Fred Nurney
as Man in Cafe

Filled with misogynistic bits, the film's highlights are a crafty Edith King as the storeowner who sold Bill the prized scarab diamond and June Duprez as a sympathetic and underutilized nightclub singer.

The most startling aspect of the production is the extreme poverty and squalor that he captures with his camera.

Routine mystery suffers from Ladd's seeming indifference to his character in the lead and Gail Russell's unsuitability for her role. A lovely actress, her looks had not been destroyed by her extreme alcoholism at this point, her presence is too gentle to be convincing as the sort of femme fatale that was Ladd's frequent partner, Veronica Lake's stock in trade. The best performance comes from supporting player Edith King, in her screen debut, as the shady but very fun Mrs. Smith who though it's never stated outright is obviously the local madame as well as involved in other shady doings. The picture comes to life whenever she enters the scene. It's a pity her role isn't larger. Otherwise this is a standard actioner that the studios pumped out weekly to keep product in the theatres during the Golden Age.