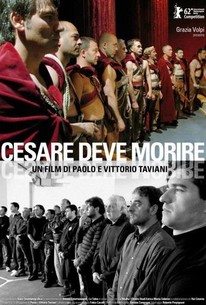 Winner of the Golden Bear at the Berlinale, Paolo and Vittorio Taviani's Caesar Must Die deftly melds narrative and documentary in a transcendently powerful drama-within-a-drama. The film was made in Rome's Rebibbia Prison, where the inmates are preparing to stage Shakespeare's Julius Caesar. After a competitive casting process, the roles are eventually allocated, and the prisoners begin exploring the text, finding in its tale of fraternity, power and betrayal parallels to their own lives and stories. Hardened criminals, many with links to organised crime, these actors find great motivation in performing the play. As we witness the rehearsals, beautifully photographed in various nooks and crannies within the prison, we see the inmates also work through their own conflicts, both internal and between each other. -- (C) Adopt

Cosimo Raga
as Cassio
View All

News & Interviews for Caesar Must Die

View All Caesar Must Die News

Critic Reviews for Caesar Must Die

It is almost an impertinence to think that we understand the thoughts of these actors and those in the audience who are relatives and friends. But this is the intriguing privilege that the Taviani brothers have given us.

There's barely a wasted moment in the film, which runs a brisk 76 minutes and contains no female roles.

There's an intensity and emotional accuracy to the performances that's just stunning, particularly Striano's Brutus, as he longs for death and release.

It is difficult to understand exactly where documentary ends and fiction begins, but the finale, again in colour, of the triumphant first night of the production can't fail to move.

It's never anything less than interesting, though I felt it didn't quite fulfil its potential, and the repetition of material at the beginning and end is disconcerting.

It is uncanny how Italy's film-makers keep failing to nail, or effectively to satirise, their country's strident political shortcomings.

The determination-at times it seems close to anguish-with which they seize that opportunity reenacts what must have been the astonishing force and challenge launched by the actors who first played Julius Caesar.

Despite its lean and hungry look, the Taviani Brothers' Caesar Must Die may be the most effectively gimmicked version of Shakespeare's Julius Caesar in the 75 years since Orson Welles's modern-dress, anti-fascist staging.

A fascinatingly perceptive film that blurs the lines between art and reality, Caesar Must Die brings a whole new intensity to this Elizabethan examination of betrayal and duplicity.

... "Caesar Must Die" combines documentary, theater, and fiction in ways that could hardly be more au courant.

The most gripping and brilliant Shakespeare production put on film since Laurence Olivier's Hamlet.

A double hybrid that occupies a space somewhere between documentary and fiction right along the border of cinema and theater.

Audience Reviews for Caesar Must Die

I saw this at the 2013 Cleveland International Film Festival. I loved it! It is partly in color and partly in black and white. It is not a straightforward production of Julius Caesar. It is about the theater process. The actors are real-life incarcerated Italian prisoners. We end up seeing an abbreviated version of the play, since time is spent reading between the lines. We watch some of the auditions. We watch the rehearsals. We watch a couple of the leads as they privately memorize their lines and sort out their characters' motivations. We watch the whole prison get excited for the magic of theater. And then in color, we see bits of the performance staged for the public. The aftermath is used as bookends, and while it doesn't make much sense at the start, it is heartbreaking at the end as we observe the impact theater had on these men who still face confinement. It is well shot and there are moments of tension as well as comedy. We learn in the closing credits that Giovanni Arcuri, who plays Caesar, and Cosimo Rega, who plays Cassius, have both written books. Cosimo was apparently profoundly affected by the experience. Salvatore Striano, who is excellent as Brutus, has since continued acting on stage and in four other feature films.

"Caesar Must Die" is not the name of a "Spartacus" spin-off.(which I'm also not entirely ruling out by the way) Rather, it is a riveting production of Shakespeare's "Julius Caesar," which is about power and betrayal, performed by a group of convicted criminals in a maximum security prison in Italy.(Of those we meet in the auditions, only a couple are not in their 40's, thus implying these are lifers in more than one sense.) This is not just a filmed stunt, as the claustrophobic environs of the prison are woven seamlessly and subtly into the performance itself, filmed in black and white. Ostensibly, these are just rehearsals which end up taking on a life of their own, as work on the theatre continues. Otherwise, the only segments in color are the play's ending and its triumphant aftermath. As much as the convicts put into the play via their unique interpretations, it could also be said that they get an equal amount out of the experience, as one comments at the end of the movie that after realizing that there is such high art, his imprisonment has become that much harder to bear.

An interesting docufiction that is both an intelligent meta-narrative feat and an important record of a real production - the staging of Shakespeare in a prison. But above all, it shows how Art can have a transforming impact on even the most unexpected of people.

'Caesar Must Die'. A skillful blurring of documentary and scripted material in this meta, exploratory take on 'Julius Caesar'. I really liked this. I didn't love it though, the main reason being I didn't feel I got to know the characters, and form that emotional attachment. Your introduction is the casting process, and maybe the lines were *too* skillfully blurred for me to form that attachment as it went along. I wanted them to "break character" for lack of a better phrase more often, and get to know them. No doubt the fourth wall was broken occasionally, but I couldn't follow them on their journey as much as I'd like to have.