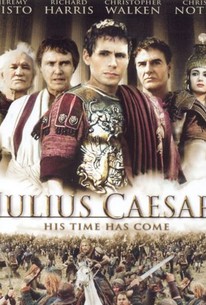 Director Uli Edel (Body of Evidence) helmed this 2002 miniseries that aired on the TNT cable network and presents an epic take on the life of Julius Caesar. Jeremy Sisto stars as the ill-fated Roman lead who conquered much of the known world in the name of his empire, leading him to be named dictator for life and later assassinated by his nephew and trusted ally, Marcus Brutus (Paolo Briguglia). Also starring Richard Harris, Valeria Golino, and Christopher Walken, Julius Caesar has also been aired under the simplified title of Caesar.

Constantine Gregory
as Pythias
View All

There are no critic reviews yet for Julius Caesar. Keep checking Rotten Tomatoes for updates!

This movie have some nice historical staging, and perspective, especially on the length of time wars took back then. In the end, there are some nice moments and elements in this film, but they don't quite seem to ever come together properly.