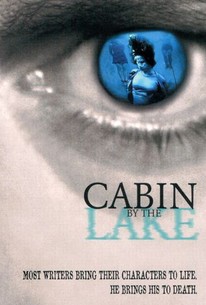 A writer's deadly secret is about to rise to the surface in this made-for-TV suspense thriller. Stanley Caldwell (Judd Nelson) is a screenwriter working on a story for a suspense film about a lunatic who kidnaps and murders young women. However, Stanley's research methods are more than a bit unusual -- he actually does kidnap women, and once he's learned as much as he thinks he can from them, he disposes of their bodies by drowning them in a nearby lake. Stanley's buddies who work at a special effects company don't suspect anything could be wrong, nor does the local sheriff Boone Preston (Michael Weatherly), but when Stanley snatches Mallory (Hedy Burress), a pretty but iron-willed teenager, he may have finally found a victim who can outwit him and put a stop to his twisted game. Cabin by the Lake was produced and first aired by the USA cable network.

John B. Destry
as Melvin

Katrina Matthews
as Blonde at Theater

Colin Foo
as Fisherman on Lake

Santino Barile
as Maniac
View All

Critic Reviews for Cabin by the Lake

There are no critic reviews yet for Cabin by the Lake. Keep checking Rotten Tomatoes for updates!

Audience Reviews for Cabin by the Lake

The humor really helps this film. Nice bits about being a writer. Could be every writer's fantasy.

Wanna know something funny? I watched Cabin by the Lake and its, if possible, shittier sequel in a cabin. Except it was by the ocean, not a lake. It was also awesome, unlike this movie. A movie about a screenwriter cultivating a garden of dead women sounds like some macabre self-indulgent fantasy to me. It's almost as if the genius behind this script was saying, in more words, "someone option this script or this is the fate that will befall several young girls." And then a hapless TV studio, worried about safety more than quality, did so. And this cheesy piece of horror doo-doo was born. Congratulations, you just watched me tell the worst story ever. Except not because you probably haven't seen this movie yet.

Cabin by the Lake Quotes