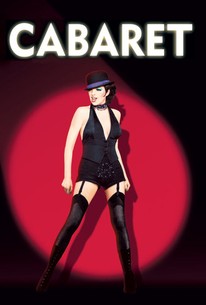 Adapted from the Broadway show, this hard-hitting musical drama is set in decadent 1930s Berlin during Hitler's rise to power. The film chronicles Cambridge student Brian Roberts' friendship with the high-spirited Sally Bowles, a singer at the sleazy Kit Kat nightclub, where the anti-Semitic emcee sets a tone of debauchery.

Joel Grey
as Master of Ceremonies

Bob Fosse's direction is as chaotic as it was in his previous Sweet Charity, a desperate scramble after a style.

The screenplay, which never seems to talk down to an audience while at the same time making its candid points with tasteful emphasis, returns the story to a variety of settings.

Whatever this 1972 feature is, it's entertaining and stylish, though maybe not quite as serious as it wants to be.

Superbly choreographed by Fosse, the cabaret numbers evoke the Berlin of 1931 - city of gaiety and perversion, of champagne and Nazi propaganda - so vividly that only an idiot could fail to perceive that something is rotten in the state of Weimar.

...the context of Germany on the eve of the Nazi ascent to power makes the entire musical into an unforgettable cry of despair.

Everybody in Cabaret is very fine, and meticulously chosen for type, down to the last weary transvestite and to the least of the bland, blond open-faced Nazis in the background.

Cabaret (1972) is director/choreographer Bob Fosse's defining, decadent, award-winning musical which popularized the phrase: "Life is a Cabaret." It was only Fosse's second film, but won numerous accolades...

The Bowles cycle is a gruesomely instructive guide to our worst show biz conventions.

A truly great movie adapted from truly great source material, but it achieves most of its greatness by thoroughly gutting and re-imagining that source.

"The Nazi musical," as star Liza Minnelli glibly put it, has felt pertinent for a long time.

It's an all-time masterpiece, mercurial and timeless. I am changed every time I see it.

Cabaret is in some respects a typical feel-good musical, yet it's also so much deeper than that.

Liza Minnelli is fabulous and deserved the Oscar she won for her role in this delightful musical that offers great performances from the rest of the cast and keeps us always conscious of an inevitable darkness that lurks in the shadows to stand in the way of the characters' success.

Liza Minelli plays an annoying cabaret singer who turns a gay guy straight, gets pregnant (possibly by him, possibly by one of the other guys she was sleeping with) and then has an abortion. All while under the backdrop of a burgeoning nazi germany. Liza performs the title song well, but the bulk of the film is largely uninteresting.

Incredibly immersive. The most upbeat, quirky tragedy around.

Life is a cabaret, mien herr! This musical about a cabaret performer and her lovers was perfect for the 70s. I especially love York's performance in the movie. This is a great film.