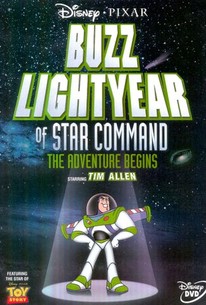 Buzz Lightyear, the plastic spaceman who helped conquer the toy box in the wildly popular Toy Story films, returns in this animated adventure. Buzz (voice of Tim Allen) and his partner Agent Z (voice of Diedrich Bader) have devoted themselves to keeping Gamma Quadrant in Deep Space free of evildoers, but when Agent Z is lost in battle, Buzz is determined that from now on, he has to go it alone. However, after the evil Emperor Zurg (voice of Wayne Knight) kidnaps Buzz's allies, the LGM -- aka Little Green Men (voice of Patrick Warburton) -- Commander Nebula (voice of Adam Carolla) orders Buzz to bring along reinforcements as he flies into battle. With the help of female Space Ranger Mira Nova (voice of Nicole Sullivan), LGM-designed android XR (voice of Larry Miller), and janitor/aspiring Space Ranger Booster (voice of Stephen Furst), Buzz sets out to defeat Zurg's minions and bring back the LGM safe and sound. Unlike the first two Toy Story features, Buzz Lightyear of Star Command: The Adventure Begins was created using traditional cel animation rather than digital computer animation techniques, though computer animation was used for the film's prologue. The film's theme song is sung by another noted space voyager, William Shatner.

Poll: Which Pixar Sequel Would You Like to See Next?

Whipping up the energy to dislike it seems entirely disproportionate to how trivial and disposable the product is.

It's very rare for Disney to cash in on anything so I was surprised at how enjoyable this was. It still follows basic Disney characterisation: Team Lightyear consists of heroic and brave Buzz, spunky red-headed female, big, clumsy and lovable red guy and a comedic robot. And Agent Z's true identity will shock nobody. And yet for all of this it does have a charm and I did find myself smiling. It cannot touch the Toy Story films but it's still an above-par Disney STV.

A nice way to keep the character going without the rest of the cast from the movies.