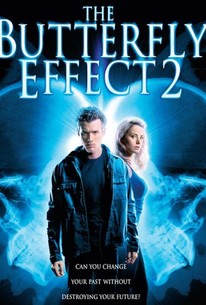 When a man's girlfriend is killed in a tragic auto accident, his time-traveling attempts to alter her fate have some unexpected effects on the events of the future in director John R. Leonetti's shocking sequel to the 2004 Ashton Kutcher hit. Nick (Eric Lively) and Julie (Erica Durance) were deeply in love, but when death robs the young couple of their lifetime of happiness, Nick isn't willing to say goodbye to his soulmate without a fight. Soon discovering that he has the ability to travel into the past to a point before the time of Julie's untimely death, Nick struggles to find a means of saving his one true love despite the increasingly troubling results that his well-intended heroics seem to have on the future.

Critic Reviews for The Butterfly Effect 2

A better film than its original, but that's not saying much when you remember what the original brought with it...

Audience Reviews for The Butterfly Effect 2

Same story but just with different people. Not as great as the first one but wasn't that bad either. The ending was sad (and I hate sad ending).

Awful. Didn't recapture the magic of the first film and was just gratuitous and stupid in every single way. I didn't care about the charactes, I didn't care what happened.

Same format as the first (as expected) with a different set of circumstances, which could have developed into a fairly good story, instead it turned in to quite a pointless sequel.

Boy, they just don't make um like they used to.