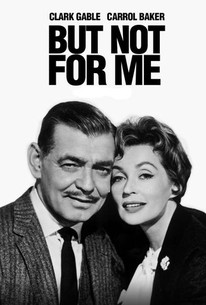 But Not for Me Photos

Clark Gable stars in this standard romantic comedy, one of his last films before his death in 1960. Based on the play Accent on Youth, this adaption of the love affair between an older man and his 22-year-old secretary ends differently. Russ Ward (Gable) has been producing for thirty years, and when he decides to call it quits, his secretary Ellie (Carroll Baker) writes him a love note with her resignation. Russ opts for turning this intriguing situation into a hit play -- starring Ellie in the title role. At the same time, he romances Ellie and starts an internal struggle over his May-December affair. The title song, But Not for Me went on to become a popular hit.

Critic Reviews for But Not for Me

There are no critic reviews yet for But Not for Me. Keep checking Rotten Tomatoes for updates!

Audience Reviews for But Not for Me

Charmer finds Gable at near the end of his career still fully in command of his star power as a somewhat roguish producer who is juggling both personal and professional issues. Lilli Palmer is an excellent match for him, her continental charm playing off his brusk exasperation with surprising ease. She's so good it's a shame her role is rather small but she makes every moment she's on screen memorable and you miss her when she's out of the picture. Lee J. Cobb likewise makes his modest role seem more than it is by filling it with his magnetic presence. The kind of breezy star vehicle that is rarely if ever made today, spotlighting the star but loaded with talent in almost every role. Competently directed and as an added bonus Ella Fitzgerald sings the title tune over the credits. For Gable fans this is a must!

But Not for Me Quotes