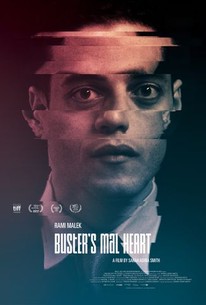 In this bold thriller peppered with dark humor and interlocking mystery, an eccentric mountain man is on the run from the authorities, surviving the winter by breaking into empty vacation homes in a remote community. Regularly calling into radio talk shows - where he has acquired the nickname "Buster" - to rant about the impending Inversion at the turn of the millennium, he is haunted by visions of being lost at sea, and memories of his former life as a family man. Buster (Rami Malek) was once Jonah, a hard-working husband and father whose job as the night-shift concierge at a hotel took its toll on his psyche and, consequently, his marriage to the sensitive Marty (Kate Lyn Sheil) - until a chance encounter with a conspiracy-obsessed drifter (DJ Qualls) changed the course of their lives forever. As the solitary present-day Buster drifts from house to house, eluding the local sheriff at every turn, we gradually piece together the events that fractured his life and left him alone on top of a snowy mountain, or perhaps in a small rowboat in the middle of a vast ocean - or both, in this visceral mind bender that will provoke discussion long after it turns your world upside-down.

Teresa Yenque
as Adelita
View All

The Tick Season 1, The Handmaiden, and More on Netflix and Amazon Prime
On DVD This Week: Kong: Skull Island, Free Fire, and More
The Circle Lacks Dimension

This peculiar indie drama scores points for originality and impressive performances, though it's elusive in its design and feels unsatisfying on the whole.

Smith's eye for arresting images is as strong as Malek's gift for being both present in the moment and lost in his character's anxieties.

Whatever wavelength the quietly riveting Malek and the equally intriguing Sheil are on, they're on it together.

If you appreciate a writer/director and actor who swing for the fences and chase after big questions ... this has a dreamlike beauty that may catch you in its spell.

Smith's idiosyncratic style isn't going to please everyone, but she deserves top marks for bold ideas and storytelling.

Happily, the weirdness is not for its own sake, and the story, while scrambled, is anything but incoherent.

Sarah Adina Smith teasingly dips to sci-fi, only to haphazardly scatter it all for the sake of philosophy. In lieu of a rule-bound universe, we get a smattering of quantum mechanics, apocalypse myths and a shaking fist at God and the Bible.

These themes of class and ethnicity in Buster's Mal Heart aren't frying pan head blows. They're subtle in order to sneak into your subconscious and reveals how a system, also subtly placed in Reagan's America is shattered.

Both Malek and Smith are masters at letting the viewer know they're not getting the full story, but keeping them guessing as to what's being hid.

This is one unsettling movie guaranteed to inspire many deep, philosophical conversations.

It's a film brimming with ideas and possibilities. Yet, it isn't reigned in by any of them.

SPOILER ALERT: Do *not* read any further if you don't want the ending revealed. I will attempt to explain the meaning of the movie. Jonah loves his wife and his toddler daughter, but he is over-worked, over-stressed, and an under-achiever as he works the night-shift at a hotel. He walks through life in a zombie-like way hoping for a better life for his family, seeing unreachable goals as living free in the country. But he cannot afford this, and he cannot lift himself from his rut. He is seriously sleep-deprived, and this slowly leads to mental delusions, possibly a split in personalities. Jonah meets a drifter (DJ) who comes into the hotel, asking to stay in a room for free. DJ is obsessed with conspiracy ideas. He believes he's a prophet. DJ rants his psychotic ideas to Jonah, who listens silently, until he's had enough. Jonah yells at DJ, telling him to stop. However, DJ doesn't exist. DJ is only in Jonah's head. The security cameras at the hotel prove this. Jonah's history with homeless suggests he has always had some level of mental illness. While Jonah loves his family, he feels trapped by them. He also feels guilty that he cannot provide the life he dreams for. He needs money, and gets DJ to steal jewelry from hotel guests, not realizing that he himself is stealing, because the real Jonah (a sweet and kind man) would never do such a thing. Jonah feels trapped by "the system", his job, and his family. His serious sleep deprivation develops into a personality split, where DJ takes over, doing what Jonah cannot. "DJ" kills his wife and daughter. Jonah grieves. The police and investigators begin to suspect Jonah when things don't add up (they discover that there is no drifter who entered the hotel, as Jonah claimed) and gather evidence to arrest Jonah, but Jonah flees before that happens. He goes to the mountains and lives free as a hermit under a third personality (first Jonah, then DJ, now Buster), breaking into empty vacation homes, eating their food, bathing, and perhaps getting revenge on the rich who have "mastered the system", something he was unable to do. At the funeral, he says, "I don't believe it" because he hasn't 100% convinced himself of his lies to himself, yet. The authorities become aware of this hermit and hunt him down. But Buster is smart and avoids capture. Meanwhile, Buster is obsessed with conspiracy theories, an alternate universe, and an inversion which he predicts will come soon. At the same time, he is conflicted and haunted by memories and flashbacks of his former life as a loving husband and father. The sheriff eventually catches up with him and hunts him down, shooting at him as he emerges from a cave. But their bullets miraculously miss his body, and he escapes in the dust. Totally out of his mind now, and after seeing his religious mother plead for him on TV, he takes a row boat out on a spiritual journey to his death. There are several religious images - the boat at sea, frogs fallen from the sky, xxx. Before he dies, he confront his true self, Jonah, who tries to kill Buster in revenge for killing his family. Him waking up on the beach is showing his belief that he somehow sent his family through the inversion that he imagined to be real. There is enough ambiguity to have several interpretations. There is a vague hint that the daughter drowned. Perhaps this guilt and anger fed into his killing his wife. Another interpretation is that he has always been clean-cut hard-working Jonah, but imagines another life. This movie will not be a top-seller simply because it is too "out there" to be appealing to the masses.