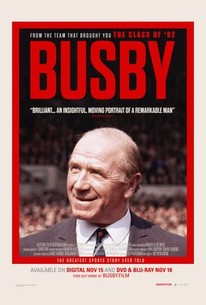 During his 25 years in charge of Manchester United, the charismatic leader led the club to total domestic dominance and European glory. Known for his championing of young players, Busby developed football legends including George Best and Bobby Charlton, one of the original 'Busby Babes'. Transforming Manchester United from the second-best team in town into one of the world's most successful and iconic football clubs, Busby changed the shape of, not just United and the city of Manchester as a whole, but the very game itself. From Sir Matt's humble beginnings in a small Scottish mining village, to twice rebuilding a football club first ravaged by war and then by the tragedy of the Munich Air Disaster, BUSBY is the definitive story of the founding father of modern Manchester United, a sporting pioneer whose legacy can be traced right up to the treble winning Manchester United side of 1999, and beyond.

Busby was clearly someone who didn't want to give much away: other than noting his occasional ruthless streak, this film, decent though it is, doesn't really get past the public image.

There are no featured reviews for Busby at this time.