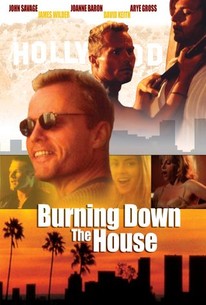 Burning Down the House Photos

A would-be movie mogul has to decide just how low he's willing to sink to get his next picture made in this black comedy about life in Hollywood. Jake Seiling (John Savage) is a filmmaker who wants to adapt a recent novel by author Arthur Kranson (William Atherton) for the screen, convinced it has major box-office potential. However, the book in question has already been optioned by veteran filmmaker Sy (Orson Bean). When Sy dies unexpectedly, Jake is convinced that his chance has arrived, and he's able to persuade a French producer (René Auberjonois) to put up seed money for the project. It doesn't take long, though, for Jake to go through the producer's initial stake, and as he struggles to raise more money to put the film before the cameras, Jake's business partner Arnie (James Wilder) comes up with what he's certain is the perfect plan -- burn down Jake's house, and use the insurance money to finance the movie. Based on the play +High Tension in the Tropics by Michael Cole Dinelli, Burning Down the House was shot in 1998, but went unreleased until 2004.

Darnell Dalton
as Man at Bar

Kristen Dalton
as Woman at Bar

James Cappe
as Man at Restaurant

Reginald H. Hooks Sr.
as Man at Party
View All

Critic Reviews for Burning Down the House

you might check it if for no other reason than to watch the buxom Baron incessantly fondle herself.

There are no featured reviews for Burning Down the House at this time.

Burning Down the House Quotes