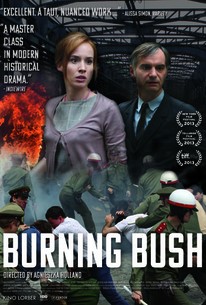 Prague, January 1969: Czech student Jan Palach sets himself on fire to protest the brutal Soviet military crackdown following the period of political openness known as Prague Spring. Polish filmmaking great Agnieszka Holland, who was a student at the FAMU film school in Prague during this tumultuous period, vividly recreates the political and cultural zeitgeist of Czechoslovakia in the late '60s. What could have been a standard docu-drama, in the hands of this superb filmmaker, becomes a stirring, complex account of the tension that swirled around these events and set the stage for the defeat of Communism 20 years later. As a period thriller of Cold War intrigue, BURNING BUSH has been likened to THE LIVES OF OTHERS. (c) HBO

Critics Consensus: How to Train Your Dragon 2 is Certified Fresh

Holland never risks overlooking the hardship that comes with being on the right side of history. "Burning Bush" is a riposte to the idea that there's anything beautiful about dying for your beliefs.

An absorbing docudrama that maintains a gratifying equilibrium between hope and cynicism.

"Burning Bush" really isn't intended for American viewers, and you may need to do a little homework or scramble to keep up. Generally speaking, it's highly worth it.

As powerfully enthralling as it is emotionally resonant, Burning Bush is Holland's most rewarding film in years.

The opening is sensational and, as if the narrative weren't compelling enough, [Agnieszka] Holland keeps trying to top it for the rest of the movie with a hectic, hyper dramatic camera style.

... inert and has no sense of flow, and this despite the wavy dramatic effect caused by the three-part scrunching.

... a return to form for Holland, whose great films of the eighties and nineties (Angry Harvest, 1985, Europa Europa, 1990) combined the political, social and personal with a fiery volatility.

It's a massive story of secret heroism, perfect for pop cinema-and with Holland's film, the time for movies to explore it may be nigh.

Michael Atkinson
In These Times
View All Critic Reviews (23)

There are no featured reviews for Burning Bush at this time.