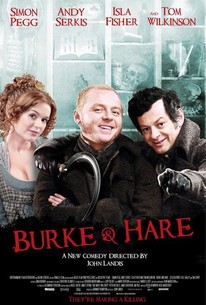 Critics Consensus: Marked by timid scares and flat-footed humor, Burke and Hare is a missed opportunity for its talented cast and a disappointing return for director John Landis.

Critics Consensus: Marked by timid scares and flat-footed humor, Burke and Hare is a missed opportunity for its talented cast and a disappointing return for director John Landis.

Critic Consensus: Marked by timid scares and flat-footed humor, Burke and Hare is a missed opportunity for its talented cast and a disappointing return for director John Landis.

News & Interviews for Burke and Hare

View All Burke and Hare News

Critic Reviews for Burke and Hare

Rarely has the ratio of quality talent to dismal returns been as high as in "Burke & Hare,'' a macabre British period piece that's nowhere near as funny as it thinks.

"Burke and Hare" is a waste of a good cast and a better story, as well as a hollow reminder of how John Landis seemingly has lost his touch.

A droll take on one of the most notorious mass-murder cases of the 19th century.

All of the actors are enjoying themselves, and the movie is stuffed with history, atmosphere and vivid characters. What's in short supply, though, is laughter.

To call it a black comedy is probably misleading: It's grey at best, and apart from a few scattered chuckles, it dies as quickly and gracelessly as Burke and Hare's victims.

Burke and Hare is timid and dithering and blandly bad, and the new Ealing Studios seems unworthy of its inheritance, and it's all just a damn shame.

Burke and Hare fails at every turn. It's a romantic comedy without jokes or romance. It's a horror film without the horror.

Burke And Hare is a damning return for Ealing. It's self conscious and off putting cameos ruin the film. Full of misjudged humour, mixing immature humour with overly mature gore makes this one not funny in the slightest.

Will Chadwick
We Got This Covered

A misfire to be sure, Burke & Hare's comedic timing feels one step off, resulting in a film with solid performances and an amusing story, but not many laughs and not much replay value.

Not a first-ranked film, but for fans of horror or even just comedy, BURKE AND HARE is will worth seeing.

Audience Reviews for Burke and Hare

For a film about murdering grave-robbers the final product is surprisingly harmless. Sure, there are plenty of dark-humored jokes about murder and death. but the story never quite manages to make you care about anything that's going on nor exactly burst out with laughter. The comedic timing is off, most of the time. Considering the talent involved here, that's quite shocking. At least the early 19th century Edinburgh setting looks really good. Wasted opportunities aplenty.

[img]http://images.rottentomatoes.com/images/user/icons/icon13.gif[/img] It's supposedly a horror comedy according to the marketing strategy it used. Question is was it scary? No. Was it funny? Sometimes. The fact is it's been panned since release but it's not an entirely bad movie. John Landis who brought us An American Werwolf in London; a hilarious and original horror comedy has the perfect cast at his disposal. But they were far too restrained by the flimsy script to make full use of their comedic talent. When you have Simon Pegg, Andy Serkis and Ronnie Corbet you have to provide them with the best material and often this film doesn't deliver. There's a lot worse out there, it isn't Shaun of the Dead but Burke and Hare gives off frequent chuckles and a couple good laughs but not enough ultimately to sustain it's running time. It's fair at best.

Yes, there is a fair bit of comedy thrown into the mix along with some prestigious actors and actresses, for a grim-ish yet relaxing saturday afternoon flick.