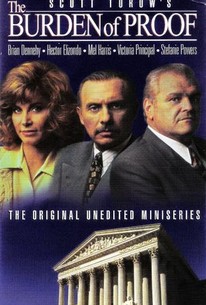 The Burden of Proof Photos

This made-for-TV movie was originally offered in two parts under the title Scott Turow's Burden of Proof. Adapted by John Gay from Turow's bestselling novel, the film stars Hector Elizondo as defense attorney Alejandro "Sandy" Stern, the same character played by Raul Julia in the 1990 cinemazation of Turow's Presumed Innocent. This time, Stern's private and professional life have merged, as he investigates the suspicious suicide of his wife. He also comes to the aid of his rather unsavory brother-in-law Dixon Hartnell, a commodities broker who is under federal investigation. Hartnell is played by Brian Dennehy, who also appeared in Presumed Innocent, albeit in a different role. Part One of Burden of Proof first aired February 9, 1992; Part Two, wherein Sandy Stern is confronted with numbing revelations of sexual and economic misconduct, was telecast February 10.

Critic Reviews for The Burden of Proof

There are no critic reviews yet for The Burden of Proof. Keep checking Rotten Tomatoes for updates!

There are no featured reviews for The Burden of Proof at this time.

The Burden of Proof Quotes