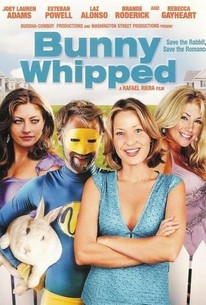 Neophyte writer-director Rafael Riera helms the rollicking direct-to-video comedy Bunny Whipped. Traveling in the footsteps of Blankman and Hero at Large , Riera brings us yet another masked crusader sans any superhuman powers. By day, he's Bob Whipple (Esteban Powell), sportscaster extraordinaire stuck in a dead-end existence; by moonlight, he's The Whip (also Powell), a generally helpless superhero nonetheless determined to bring the men to justice who rubbed out a white rap star. Bob's adventures soon bring him into close proximity with his high school flame, Anne (Chasing Amy's Joey-Lauren Adams) who tries to recruit him to help her save a bunch of endangered rabbits. He agrees, but - horror of horrors! - must face down the chief suspect in the rap star's murder when that shady character decides to kidnap Anne.

Amanda Noret
as Jennifer
View All

This is a movie that looks like it was written on the fly, and they just never got around to shooting any of those important 'story' parts before the money ran out.

There are no featured audience reviews yet. Click the link below to see what others say about Bunny Whipped!