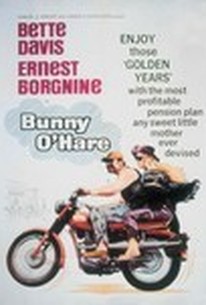 Would you believe Bette Davis and Ernest Borgnine as a pair of free-spirited hippies on a crime spree? That's the premise of this unlikely comedy starring the two Oscar-winning veterans. Bunny O'Hare (Bette Davis) is an elderly woman living in New Mexico who is trying to keep herself afloat financially while supporting her two grown children, both of whom have fallen into bad straits. Thanks to a mistake by her bank, Bunny is evicted from her home, which is quickly torn down, but not before one Bill Green (Ernest Borgnine) can repossess her commode. Bunny is left with nowhere to go, and Bill allows Bunny to tag along in his trailer after he leaves. Bunny soon learns that Bill was once a bank robber who is still on the run from the law, and she persuades him to show her the ropes so she can steal her nest egg back from the bank. Dressed as hippies, Bunny and Bill pull the job, but rather than escape to Mexico, Bunny decides to stay in the Southwest and rob more banks with Bill to help keep her kids out of hock. Bunny O'Hare also features Jack Cassidy, John Astin, and Jay Robinson; ~ Mark Deming, Rovi

Bunny O'Hare is nonsense of a quite acceptable order, filled with absurd chases and stock characters who have been conceived and played with affection.

There are moments when you don't hear the clank and grind. But only moments.

Bette Davis and Ernest Borgnine play a Bonnie and Clyde of the Geritol set and the result is about as satisfying as a bad television show.

There are no featured reviews for Bunny O'Hare at this time.