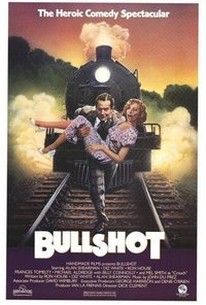 Plot is a secondary consideration in this partially successful, partially failed take-off on the Bulldog Drummond series of the 1930s. "Bullshot" Crummond (Alan Shearman) is a square-jawed hero of World War I who longs to face off against his German arch-nemesis Count Otto von Bruno (Ron House) one more time. He gets his chance when he must save Rosemary Fenton (Diz White), a damsel in distress -- her father made a top-secret discovery before he died and Count von Bruno wants that secret for himself, no matter what happens to the good Rosemary. As the hijinks unfold inside the requisite Sinister Mansion (Bullshot fights a giant octopus and leaps onto a plane in mid-air as the action reaches a crescendo), caricature, and zany anarchy provide the humor. ~ Eleanor Mannikka, Rovi

Material like this is so zany, so willfully implausible, that unless the actors play it with reckless abandon, it looks odd, not funny.

There are no featured audience reviews yet. Click the link below to see what others say about Bullshot!