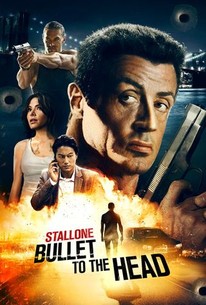 Critics Consensus: Bullet to the Head's unapologetically trashy thrills evoke memories of its star and director's proud cinematic pasts -- but sadly, those memories are just about all it has to offer.

Critics Consensus: Bullet to the Head's unapologetically trashy thrills evoke memories of its star and director's proud cinematic pasts -- but sadly, those memories are just about all it has to offer.

Critic Consensus: Bullet to the Head's unapologetically trashy thrills evoke memories of its star and director's proud cinematic pasts -- but sadly, those memories are just about all it has to offer.

Bullet to the Head Photos

Based on a graphic novel, Bullet to the Head tells the story of a New Orleans hitman (Stallone) and a DC cop (Kang) who form an alliance to bring down the killers of their respective partners. -- (C) Warner Bros

Kara Bowman
as Medic
View All

News & Interviews for Bullet to the Head

Critics Consensus: Warm Bodies is a Date Night of the Living Dead

View All Bullet to the Head News

Critic Reviews for Bullet to the Head

Hill's eye for back alley scuzz is as strong as ever, but the story, adapted from a French graphic novel by Alexis Nolent, is so die-cut it gives neither him nor Stallone anything to work with.

It's a series of fight scenes that build to a climax that is surprisingly unsatisfying in the way it ultimately plays out.

Sylvester Stallone shoots people in the face. That's it for subtext in this formula action swill. Why do I sound like I should expect more. Because the credits list the director as Walter Hill.

Bullet to the Head doesn't try to adapt its star to 2013. It just pretends that we're still living in 1986. And for 91 minutes, it just about works.

Stallone can still be entertaining, but here he's got no character to play, nothing fun to say, and the craziest hair/hairpiece/scalp growth this side of John Travolta.

Wanton disregard for human life is the point of the whole movie, and when Hill lets his protagonist out to play, "Bullet to the Head" is best. The rest of the time, when they try to insert story or character-or any time there are words-problems arise.

Much like its star, it's a film from another era, and at its heart pulses a steely verve that is sorely missing in many modern action films.

Will appeal to certain audiences, and those hoping for silly fun in the vein of throwaway one-liners and axe-fight showdowns will not be disappointed. For others, Stallone's latest is best viewed on smaller screens, if at all.

I can hardly call Bullet to the Head bad; it's just so bland on pretty much every level that there's not much to say but 'meh'.

Although Bullet to the Head comes nowhere near the pantheon of the great buddy movies, and some fans of the original graphic novel might wince at the changes, there's enough fun to be had...

At times it feels as though the whole thing has been scrubbed clean of anything resembling theme.

Audience Reviews for Bullet to the Head

Derivative, formulaic and clichéd action film, Bullet to the Head is a bland movie that fails to grab your attention due to a lack of originality, good performances and well executed action scenes. This is a bad film, one that is not worth your time and it's a pointless affair that just doesn't offer anything of note. Walter Hill direction is incoherent, and it's a shame because he has made some great films throughout his career, but this is among his worst yet. If you're expecting something great here, you'll be greatly disappointed as the film is pretty stupid in the way it tackles its action scenes. The film, like I said, just doesn't deliver and recycles old ideas from previous action films to create something "new". The film is boring, uninteresting fails to grab your attention. This is a pointless waste of time, a film that is so sloppily written and thought out that it's not worth your time. Sylvester Stallone has made far better films than this, and here he delivers a painfully dull performance that simply doesn't do anything to keep you interested. Bullet to the Head is a wasted opportunity to make something quite interesting and worth your time, but instead it just takes bits and pieces to create something that in the end is not worth watching because the film lacks a good story, effective action and more importantly good performances and interesting characters. This is a forgettable affair that ranks among Sly's worst movies, and it's a film that not worth your time. Walter Hill has made better films, and Bullet to the Head is easily a forgettable film in his long and distinguished filmography.

3 3/4's---I rather surprisingly enjoyed this, especailly since I expected to hate it. I found the dialogue witty, and the action scenes really decent. The highlight of the movie was with Jason Momoa (who is climbing my list of favorite actors), and Sly having a pretty cool fight with axes. I think maybe I just have a soft spot for Sly movies, as of late. He sure LOOKS great for an old guy....

Walter Hill's Bullet to the Head misses its mark.

The 90 minute story is dull, unexciting, and full of predictable plot details. Yes, there is definite room for improvement when it comes to the writing, but it could also have been a lot worse.

The violence is where this picture excels. The shootings are bloody and what better way to live up to its title by delivering a lot of head shots, backed by some decent cinematography.

While muffled and blunt at times, Sylvester Stallone's persona is fit for his hitman character. Sung Kang is a disappointment due to his dialogue and line delivery. It's hard to argue with the beauty of Sarah Shahi, so its best to leave it at that. Jason Momoa proves to be a solid adversary for Stallone and the cell phone product placement is big enough to almost warrant a character name for it.

Bullet to the Head puts some bullets in the head, but it doesn't do much more than that. Watchable once and that's it.

Veteran director Walter Hill helms this graphic novel adaptation about New Orleans (or, going by the film, Crescent City- NOLA's nickname) hitman James "Jimmy Bobo" Bonomo (Sylvester Stallone) who teams up with greenhorn D.C. cop Taylor Kwon (Sung Kang) to bring down the killers of their respective partners. It's one of those "uneasy alliance" films- something Hill is no stranger to. How exactly the plot comes together and why these two team up is a bit of a mess, but that's not the point. The point is to see a veteran action star and a veteran director make an ass-kicking action film. There is some success in this aim. The film has lots of action, and it is entertaining. But, overall, it's a rather lackluster and generic thriller, and that's a shame. The film is really typical in all the ways you'd suspect (especially the writing), and it really bums me out just how awful of a job the writing and characterization of Kwon was. He's a really dumb, whiny, and ineffectual cop (a lot of the time). I think Kang is fine, and he's just playing the part he was given, but it sucks he couldn't have been given a better part. Maybe they just didn't want someone to outshine Stallone? Yeah, that's probably it. Stallone is in typical form here, and admittedly some of his banter with Kang is fun, despite being derivative cliche. Christian Slater is okay, but appears all too briefly, which is a real shame. Jason Momoa however, is great as the primary thug, though not chief mastermind antagonist. His axe fight with Stallone is definitely a highlight. Overall, this is unspectacular stuff. Like I said, I was entertained, and, if you just want some good action and violence, it's here. I'm happy that Hill is still making movies, but I hope that if he makes another one, that it ends up being far better than this one.

Bullet to the Head Quotes