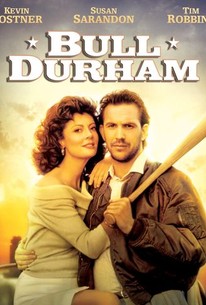 Critics Consensus: Kevin Costner at his funniest and most charismatic in Bull Durham, a film that's as wise about relationships as it is about minor league baseball.

Critics Consensus: Kevin Costner at his funniest and most charismatic in Bull Durham, a film that's as wise about relationships as it is about minor league baseball.

Critic Consensus: Kevin Costner at his funniest and most charismatic in Bull Durham, a film that's as wise about relationships as it is about minor league baseball.

A blend of comedy, drama and romance, Bull Durham follows the intertwining of three lives brought together by the great American pastime. Crash Davis (Kevin Costner, showcasing his Midwestern charm) is a perennial Minor Leaguer assigned to the Durham Bulls, a hapless team with a long tradition of mediocrity. There he tutors a young, dim-witted pitching prodigy, Nuke LaLoosh (Tim Robbins) in the ways of baseball, life, and love. Each strikes up a romance with Annie (Susan Sarandon), the team's "mascot" who takes it upon herself to sleep with a new player every season. Each has his/her own conflict: Crash struggles to end his career with some measure of dignity; Nuke struggles to make it to the "big show"; and Annie struggles to find something more than a roll in the hay -- and of course, Crash and Nuke come into conflict over Annie's affections to further complicate matters. The film treats the sport of baseball with a sort of casual reverence, highlighting both the drama and the humor inherent in the game, illustrated by Annie's numerous references to baseball as "her religion."

Max Patkin
as Himself

Screwball Annie and hardball Crash aren't playing the same game, which is Shelton's conceit as well as a possible screen-writing miscalculation.

Ron Shelton, who wrote and directed the film, displays a knowledge of and affection for the national pastime. You can see it in the knowing detail he brings to even the minor characters.

[Shelton is] uncanny at putting us inside his players' heads when they're on the mound or up at bat, running their private litanies of encouragement and subversion to psych themselves up.

Rather than a vapid national epic, it is a warm, droll, deftly cracked romantic comedy.

The acting in Bull Durham cannot be faulted and should be remembered at Oscar time. Sarandon has one of the juiciest female roles in years and she makes you think no one could play it better.

Shelton locates the tension and the humor between pitches, between ball games, between the sheets. It helps too that he has written the wittiest, busiest screenplay since Moonstruck, and that his three stars do their very best screen work.

Bull Durham puts Shelton in the Hollywood big leagues, and he's hit his very first pitch over the scoreboard in centerfield.

Bull Durham (1988) is a humorous and intelligent romantic sports comedy-drama about a mediocre Carolina minor leagues baseball team - the Durham Bulls, from first-time director Ron Shelton. It is the quintessential modern sports film about America's...

Bull Durham is the greatest baseball film ever made. It captures the essence of the game. It's full of crackling dialogue that is endlessly quotable. It's absolutely hilarious at times and heartbreaking at others.

Is Bull Durham the greatest sports movie ever made? No argument from me.

Writer-director Ron Shelton tells a wonderful story of how a veteran ballplayer and up-and-comer collide in the world of the minor leagues, and how they are loved by a baseball groupie who's also a philosopher and poet.

Does an impressive job picking up the mundane world of bush league baseball in spirit.

The grooming relationship between the classy, seasoned catcher, Crash, and the callow, rookie pitcher, Nuke, is funnier, more exciting, and more heartwarming than Annie's pseudo-intellectual, baseball is religion, poetry is foreplay, seduction wiles.

Bull Durham is a genius sports film and one of the greatest sports films ever made. Kevin Costner, Tim Robbins, and Susan Sarandon play three genius performances. The plot is great, I was never bored and it had so many different stories. I loved this movie.

A sexy romp in the baseball field, refreshing and crisp. It did stagnate a bit but the three leads are pretty darn incredible.

One of the best baseball movie ever made. Tim Robbins and Kevin Costner are awesome!!!