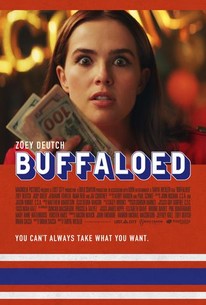 Peg Dahl (Zoey Deutch) has never run with the Buffalo pack. As a young girl obsessed with making enough cash to get out of her blue collar existence, she's betting on her sharp mind--and even sharper mouth--to get her into an Ivy League university. But when an acceptance letter to the school of her dreams arrives, she quickly realizes the impossibility of paying tuition. One scalping scheme, stint in prison, and chance phone conversation with a debt collector later changes everything. Director Tanya Wexler returns with a raucous comedy starring Judy Greer, Jai Courtney, Jermaine Fowler and Deutch (in a go-for-broke performance) that tracks one woman finding her calling in an ethically debatable industry. As much of an ode to the city of Buffalo, New York as it is to the millions of Americans struggling with a seemingly dead-end economic existence, Buffaloed wrings hearty laughs out of a particularly timely and honest reality.

The Indie Fresh List: British Gangsters, an Unlikely Friendship, and a Feisty Hustler
Sonic the Hedgehog Is Familiar but Fine Family Fun

Buffaloed churns with barely-controlled chaos in its best sequences.

This low rent She-Wolf of Wall Street is not without its charms - it's hard not to find some room in one's heart for a film that works so hard to restore the word "jagoff" to popular usage.

Thanks largely to the feisty Deutch, "Buffaloed" is a fun time, even if it's about everybody's least-favorite kind of phone call.

In 2017, Zoey Deutch managed to carry Flower, a brisk but slight comedy about an exuberant young hustler with Daddy issues. She does it again in Buffaloed, in which she plays pretty much the same character, but confronts a different social evil.

[I]t's hard to begrudge "Buffaloed" too much; this is a fast, fun watch that succeeds largely on the charms of its star and the able hands of its director.

Reality meets comedy here. They get both right

Deploys some obvious jokes and a predictable twist, but works its way to a solid punchline that makes living in post-capitalist times almost funny.

Kind of interesting, a comedy thriller writ small, but Deutch is entirely entertaining as a gifted upstart.

Zoey Deutch is a star, and watching Buffaloed, you get the sense that one day the rest of the world will catch up to her.

Michael Ward
Should I See It

There's not a lot of laugh-out-loud moments, but it's a fun story to watch unfold.

Mostly, "Buffaloed" taketh away 95 minutes of your life.

There are no featured reviews for Buffaloed at this time.