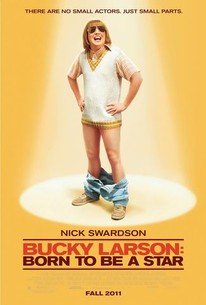 Critics Consensus: A severely misguided and inept comedy incapable of even telling its single joke properly.

Critics Consensus: A severely misguided and inept comedy incapable of even telling its single joke properly.

Critic Consensus: A severely misguided and inept comedy incapable of even telling its single joke properly.

Bucky Larson: Born to Be a Star Photos

Bucky Larson: Born to Be a Star is a new comedy starring Nick Swardson, Christina Ricci, Don Johnson, and Stephen Dorff. Bucky (Swardson) is a small town grocery bagger, going nowhere in life - until he discovers that his conservative parents were once adult film stars! Armed with the belief that he has found his destiny, Bucky packs up and heads out to LA, hoping to follow in his parents' footsteps. -- (C) Sony Pictures

Danny A. Abeckaser
as AFA Presenter

News & Interviews for Bucky Larson: Born to Be a Star

View All Bucky Larson: Born to Be a Star News

Critic Reviews for Bucky Larson: Born to Be a Star

Icky and repellent in ways it probably did not intend.

This movie is dire, soul-crushing stuff.

This isn't even a series of skits, but a series of vague ideas for skits that nobody fleshed out.

Through all this, one feels nothing more strongly than an acute sympathy for all involved -- in particular Ricci, who gives her role more than it deserves, and Herrmann, a classy character actor who once won a Tony.

Swardson and the gang generally opt for silly over edgy and outrageous, but Bucky is just too dashed-off a character for the movie to get by on that.

This god-awful, unfunny, stinkingly putrid sketch-comic movie has exactly one snicker-worthy moment, involving Kevin Nealon and a stolen grape. But watching the rest of it will make you whine.

I'm not sure how many tedious sex jokes and humorless physical gags people can take before they run out of the theater screaming, but Bucky Larson: Born to Be a Star certainly tests the limits.

Amy Curtis
We Got This Covered

Putrid and completely unfunny, 'Bucky Larson: Born to Be a Star' is a torturous exercise for a viewer. I can't count the times I wanted to walk out of this ghastly excuse for a movie. Still, I stayed with it. I just couldn't bring myself to leave.

Nothing to see here, kids.

Audience Reviews for Bucky Larson: Born to Be a Star

DID YOU EAT ONE OF MY GRAPES?!

Okay, I'll admit, there were a few scenes in "Bucky Larson: Born To Be A Star" that had me laughing out loud, but mostly it was because of how stupid the movie is. I have never seen a movie try so hard to make a story work before. So an idiot with over-exagerrated buck teeth tries to become a porn star with his parents. The comedy is that he has a small penis, which makes his very popular. Funny right? No, it's not funny at all, but for some reason, some of the secondary characters in the film seem very funny at times, particularly Kevin Nealon, who puts a roof over Bucky's head. That being said, this film is in no way funny and it is easily one of the worst of 2011. Every joke that the filmmakers force on you seems like a penis joke every 20 minutes, followed by someone making fun of his buck teeth. Cristina Ricci helps to hold whatever is left of the movie, on it's feet. This film is a great big pile of garbage that made me laugh once or twice!

Bucky Larson: Born to Be a Star Quotes