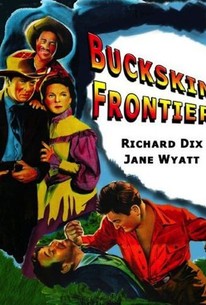 Originally slated for Paramount release, Buckskin Frontier was ultimately distributed by United Artists. Richard Dix stars as railroad troubleshooter Stephen Bent, assigned to supervise the building of 120 miles of track through the treacherous Santa Fe cutoff. He is opposed in this mission by land baron and freight service owner Jeptha Marr (Lee J. Cobb), who backs up his opposition with hired guns. Marr, in turn, is defied by his daughter Vinnie (Jane Wyatt), who is not only a visionary, but has also fallen in love with Bent. Amusingly, though Lee J. Cobb and Jane Wyatt play father and daughter in Buckskin Frontier, both actors were 31 years old at the time! The film was produced by Harry "Pop" Sherman, of "Hopalong Cassidy" fame.

William Nestell
as Whiskers
View All

There are no critic reviews yet for Buckskin Frontier. Keep checking Rotten Tomatoes for updates!

There are no featured reviews for Buckskin Frontier at this time.