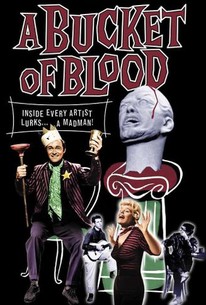 A Bucket of Blood Photos

A horror film with comedic overtones, A Bucket of Blood is produced and directed by Roger Corman. It concerns a busboy in a beatnik coffee shop who aspires to be an artist. He accidently kills a cat he is trying to rescue from a wall and entombs the animal in clay to save his job. The shallow and pretentious art critics hail the young man as an artistic genius. He proceeds to entomb his contemporaries in clay in a macabre creative furor. He cuts of a man's head with a circular saw and his murderous crimes are only discovered the copse, hidden in the rafters, drips blood on the floor.

John Brinkley
as Will

News & Interviews for A Bucket of Blood

View All A Bucket of Blood News

Critic Reviews for A Bucket of Blood

What better way to undercut the worst of artistic pretensions than to do it with a slapdash movie produced in five days called A Bucket of Blood?

It's a low budget masterwork that skewers the fad of its era while lambasting the ever-fickle art world.

It was perhaps Corman's first film to establish a really rich atmosphere, filled with nighttime shadows and a general edginess, which only grew richer on the subsequent Poe films.

A monolith of lowbrow entertainment from the days when cheap movies could be made and marketed cheaply.

One of Corman's best.

A true cult film delight from the 1950s made for all eras.

Audience Reviews for A Bucket of Blood

What is most amusing in this light, unpretentious comedy-horror movie is seeing how it makes fun of the beatniks and relies on the protagonist's hilarious maladroitness for ironic ends. Still, the low budget shows, especially in an unimpressive climax that lacks the thrills to make us care.

A blase busboy in an uber-pretentious L.A. coffee house longs for some kind of humanly positive reinforcement, which he gets tragically only after accidentally covering dead bodies in plaster, which stoner artist colony types confuse with deliberate art ("... it looks sooo lifelike ... !"). This is mostly a send-up of the hippie/poet/artist West Coast scene, but it does have decent cinematography, moody and noir-ish, while its sanctimoniously jerking the seen-it-all longhairs for a mild chuckle.

The thing that I find most charming about some of Roger Corman's directing efforts is that he shot several of his movies in just a week to save money. What he turns out isn't amazing, but has its charms. A Bucket of Blood is more akin to The Little Shop of Horrors plot-wise in that it has some lowly loser who turns to murder to get people's attention. The plot doesn't really get more complex than that. He kills a cat and covers it in clay... he kills a guy and also covers him in clay... then he kills a gal and covers her in clay. That's about the gist of the entire story. Very simple but fun. The dialogue and acting are both terrible, as is the really awful beatnik poetries. It's just fun to watch a young Dick Miller do his thing, which is about the best draw to the movie. Yeah sure it's got some subtance to it, but that's the main thing I took away from it.

This is my favourite Corman movie of the fifties, I think. The only film where Dick Miller gets to play the main character too. It's both funny and suspenseful. Plus, it's about beatniks. I love this movie.

A Bucket of Blood Quotes