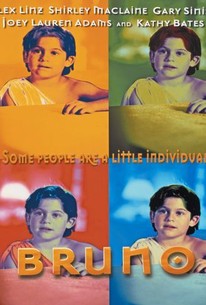 Shirley MacLaine makes her feature directorial debut with this offbeat comedy. Bruno (Alex D. Linz) is an eight-year-old boy attending a Catholic school; he is bright, is a good student, and wants to become an etymologist. He also likes to wear dresses, which causes him plenty of problems -- bullies beat him up on a regular basis, and the school's Mother Superior (Kathy Bates) thinks that something must be wrong with him. Bruno's mother Angela (Stacey Halprin), who tips the scales at 450 pounds, has just lost her husband Dino (Gary Sinise) to trampy Donna Marie (Joey Lauren Adams). With her pal Dolores (Jennifer Tilly) giving Angela regular reports on Dino's activities, she's too occupied to worry much about her son. When Bruno is hurt one day while wearing a skirt, he's taken to the hospital; with Angela suffering from a heart attack and Dino refusing to look after him, it falls to his grandmother Helen (MacLaine) to take care of the boy. But Bruno has finally found a playmate at school who doesn't find him strange -- Shaniqua (Kaimi Davael), a young black girl who wants to be a cowgirl. While Bruno was Shirley MacLaine's first attempt at directing a fictional film, it was not her first experience behind the camera; she previously made the Oscar-nominated documentary The Other Half of the Sky: A China Memoir.

Stacey Halprin
as Angela
View All

The Dress Code is Shirley MacLaine's unfortunate foray into the director's chair, and it's so feeble an attempt that it substantiates allegations of her being crazy.

Rather ridiculous comedy drama. What it's trying to say is good but it's drawn in very broad strokes.