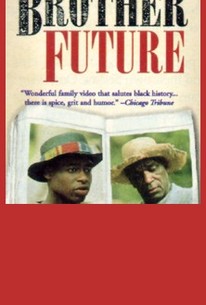 This drama was a "Wonderworks Family Movie," and tells the tale of a self-centered, rebellious African- American youth who gets a new outlook on life after he is hit by a car and finds himself awakening in South Carolina during the early 19th century. Soon he is captured and auctioned off to the owner of a cotton plantation. While working under brutal conditions, he sees other slaves working together and quietly conspiring to revolt, and when he finally awakens in the 20th century, he realizes that he must think of others and begin working to help his ghetto-bound neighbors.

There are no critic reviews yet for Brother Future. Keep checking Rotten Tomatoes for updates!

There are no featured audience reviews yet. Click the link below to see what others say about Brother Future!