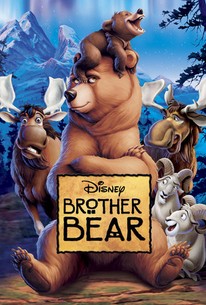 Driven by the emotional and joyous rhythms of five great new songs from Academy-Award (R) winner Phil Collins, "Brother Bear" is Disney's exciting new animated holiday adventure. Set against the majestic natural splendor of the Great American Northwest, the film tells the story of a boy named Kenai, whose life takes an unexpected turn when the Great Spirits transform him into a bear - the creature he hates most. Befriended by a bear cub named Koda, Kenai sets out to regain his human form while his brother (who doesn't realize Kenai is now a bear) pursues him on a mission of revenge and family honor. With breathtaking animation, powerful emotion and humor, this film introduces a memorable cast of characters and paints an unforgettable tale of courage, honor and self-discovery.

Daniel Mastrogiorgio
as Ram #2
View All

Disney hides the morality tale behind a rip-roaring soundtrack, goofy moose sidekicks and enough bear slapstick to delight any child.

While the animation itself (from the same team as Mulan) is charming and at times beautiful, the script is banal and uninspired.

Brother Bear is a very mild animated entry from Disney with a distinctly recycled feel.

A lame duck of a movie.

The story is so predictable.

Rough rule of thumb: the more an animated movie drones on about the Great Spirit, the less likely it is to have any great spirit.

Lackluster story only for kindergarteners.

If "the CEO wants to sell teddy bears" isn't going to inspire writers to do their best work, what on Earth possibly could?

Compared to the Disney classics, this is a lazy and forgettable misfire.

There's definitely a charm to this film, but compared to the trailblazers that came before it, this feels very underwhelming. My main complaint would be that it relies a lot on contrived ideas and has a morality that feels uninspiring, though it's dealing with big, provocative issues. The other thing that was really annoying was the reliance on Phil Collins for the music, which was an interesting gimmick in "Tarzan" but here it's unwelcome and tedious. The message relies on facing up to past misdeeds, letting go of grief's anger, and not blaming the wrong people for mistakes. I liked that it dealt with a culture that doesn't get much screen time, but most of the plot focuses more on a man-bear's journey to a mountaintop, and that's just not that exciting. It was rather funny at times too, though that's mostly because of the Canadian moose, played by Rick Moranis and Dave Thomas. The ending was amazing, and goes against a lot of traditional Disney narratives, which I thought was a very thoughtful choice. It just didn't feel very fresh, as it dealt with a lot of already trodden ground.

Animation work is above average and there are a couple of standout scenes but ultimately it doesn't reach the heights of Disney's back catalogue. Full review later.

Fun, but gets really in to spirits and crap. Great music, horrible story, good voice acting. I liked it, but didnt love it.

Brother Bear is a movie that is so close to being great that it's almost ridiculous. Had there been just a few changes made to the story, characters and dialogue, it would've been a really moving and timeless classic. As it stands though, this is interesting and beautiful to look at, but the negative aspects can be overbearing. It's a kid's movie, so the Canadian Moose brothers and Bernie Mac Kid were something I just accepted as part of the package. However, I think that there was basically little to no development of the three brothers. It's just presented and then you're supposed to care about them. Well, at least Juaquin Phoenix was good and helped make the situation a bit easier to take it. I will say that Phil Collins continued his epically constructed score treatment that he started with Tarzan and in fact, it's the strongest element of the movie.