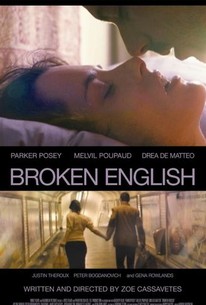 Critics Consensus: Though Broken English eventually settles into basic rom-com territory, it's pleasant and good-natured, and Parker Posey is spellbinding throughout the movie.

Critics Consensus: Though Broken English eventually settles into basic rom-com territory, it's pleasant and good-natured, and Parker Posey is spellbinding throughout the movie.

Critic Consensus: Though Broken English eventually settles into basic rom-com territory, it's pleasant and good-natured, and Parker Posey is spellbinding throughout the movie.

A single thirtysomething whose friends all seem to be romantically involved, happily married, or with child meets an eccentric Frenchman who shows her just what an amazing place the world can truly be in director Zoe Cassavetes' entry into the 2007 Sundance Film Festival. As if it wasn't depressing enough to be 35 and still single, Nora (Parker Posey) is constantly reminded by her loving but tactless mother (Gena Rowlands) just how unlucky she has been in love. Though Nora longs to enter into a blissful union like the one of her best friend, Audrey (Drea de Matteo), she finds that the dating pool just isn't what it used to be. Things soon begin to look up, however, when Nora makes the acquaintance of handsome Frenchman Julian (Melvil Poupaud). While the two share an instant chemistry that is undeniable, Nora is saddened to learn that Julian will soon be departing for his native soil. When Julian does depart, Nora laments the fact that she wasn't able to express her feelings more effectively. If only Nora could organize her scattered thoughts long enough to remember her love object's last name, she might not have to go searching out every "Julian" in Paris to locate the man of her dreams. ~ Jason Buchanan, Rovi

RT on DVD: The Lives of Others, RoboCop 20th Anniversary, and More Out Today
Critical Consensus: "Evan Almighty" Is All Wet; "1408" Is Worth A Visit; Jolie Shines In "A Mighty Heart"
More Posey for "Superman" Sequel?

How Posey's neurotic, self-destructive heroine finds her way to healing is the core of this generous film, whose moral is that happiness can't begin unless you're open to its possibility.

A likable but wan romance.

Filmmaking is a family affair for the Cassavetes, and Zoe inherits the unpretentious, performance-driven style from her father, John, while delivering a love story that's accessible enough for mainstream audiences, a trick learned from her brother Nick.

Cassavetes supplies no easy answers or easy laughs, forgoing romantic-comedy beats in respect for Nora's desperation. Call this confection a romantic-dramedy with humor on wry.

Broken English establishes a sympathetic character, gets Parker Posey to make her real, and then grinds her in the gears of a plot we cannot believe.

A promising first film with moments exceeding that promise.

Broken English surprised me all around: I didn't expect to be particularly impressed with it, and instead it turns out to be not only one of my favorite films I've see this year, but it will probably earn a spot in the all-time annals for me.

Posey's admirers will experience a sensual intoxication that fans always experience when their film goddesses are at their very best.

This isn't the best independent film we've seen starring Miss Posey, but she is the reason this one works.

a tired retread of Sex and the City, with all the same preoccupations and issues but with none of the fun

Edgy girl-meets-boy indie for older teens and up.

When Nora decides to take yet another risk against her better judgment, the film leaves to you to judge it as quixotic, vexing, or fitting.

A desperately lonely (not my words; hers: "I'm embarrassed at my own desperation") woman fails to find love in NYC so she follows a man to Paris. This is a spoiler review because the biggest problems with this film are in the third act. Parker Posey plays Nora Wilder, who is much like the lead in most romantic comedies or romantic dramas. She hates her job and finds nothing but jerks and weirdos in the dating world. She even has the best friend who doesn't seem to have a life of her own, which is almost a cliche in this genre. But the film's strength is its strategic defying of romance cliches. In the third act the best friend, whose troubled marriage until now only served as a backdrop for her scenes with Nora, breaks down in the bathroom, and we quickly realize that she cheated on her husband. Likewise, Nora quits her job, and normally, she would quickly find her calling a la 500 Days of Summer, but instead her desperate search for love irrationally carries her to Paris. The film's problem occurs when she finally meets the object of her affection on the way to the airport. He basically drags her out of the train, and the film ends with her willingness to miss the flight back home for him. I understand that the film is trying to problematize all the myths romantic movies shove down our throats; after all, not all break ups lead to a sudden realization of one's independence and life goals. The film seems to say that there are no easy answers where love is concerned. However, the over-bearing nature of Julien's seizure of Nora and her all-too-willing, wistful acceptance of his dominance make us wonder how we're supposed to feel about the film's end. I want to say to the film, "I know there are no easy answers, but what are yours? And if not yours, then what are Nora's?" In the end, these questions seem too elemental to the film's center to remain unanswered. Overall, Broken English features an excellent performance by Parker Posey, but it's stuck in a film that is being deliberately obscure in all the wrong ways.

I hesitate to call this a "romantic comedy" as the acting is far too solid to justify the stigma that (in my mind) comes with that moniker, even though the story line itself is predictable enough to warrant that categorization. It is in fact very romantic, in a pretty realistic way. And it is also fairly ammusing in it's painfully truthful accurate portrayal of "single life after 30". Which (I believe) tends to be more of a concern for women then it is for men. I have to say Parker Possey does an amazing job here and really gets to show her acting chops. And Drea de Matteo is perfect as her best friend. Very impressive work from both of them. So if you are in the mood for a really good (in not a bit predictable) "romantic comedy"...this is a good choice.

[size=3]"Broken English" is a lovely little film, reminiscent of Sofia Coppola's magical and under-stated "Lost in Translation." It also reminds me of Woody Allen's films from the 1970s.[/size] [size=3][img]http://www.availableimages.com/images/previews/Broken%20English%20(2007).jpg[/img][/size] [size=3]Writer/director [b]Zoe Cassavetes[/b] (daughter of John Cassavetes and Gena Rowlands, who has a supporting role in the film), in only her second film, has established herself as one of the most serious, funny [/size][size=3]and compassionate new filmmakers in America. She's not yet 40, so presumably we'll be seeing many more films from her in the years to come. I certainly [/size][size=3]hope she sticks to filmmaking.[/size] [img]http://theenvelope.latimes.com/media/photo/2006-11/26652837.jpg[/img] [size=3]Like Sofia Coppola, Cassavetes is an explorer [/size][size=3]of life's nooks and crannies. There is [/size][size=3]a certain main stream to life. At any given moment, one is doing a specific thing. But on the margins of that task there are all sorts of little pockets where other things occur, if fleetingly.[/size] [size=3]You could be seeing a movie, for example, and thinking mostly about the film. Bu[/size][size=3]t yo[/size][size=3]ur mind wanders a few times during the film [/size][size=3]and you [/size][size=3]contemplate in an inchoate way something relatively profound about your [/size][size=3]life.[/size] [size=3]Those asides are where Cassavetes focuses her attention. The quiet little moments when we break from the main stream of life and have a fleeting feeling that penetrates to the core of our being, without us even realizing it sometimes. This focus on the interstices of life, in my view, is one of the hallmarks of any great artist working in fiction, whether it be film or literature. The little asides we have are most often far more interesting than the main stream of daily life.[/size] [size=3][img]http://cdn.channel.aol.com/pmms/productpagemovies/0e/01/2401550[/img][/size] [size=3]The main character in "Broken English" is Nora, a college-educated, thirysomething woman who works in a posh Manhattan hotel. The asides she experiences, where she ponders her life, are getting deeper, more troubling, and harder to shake off. She often walks around New York seeming stunned, lost in some kind of vaguely disturbing reverie. She uses alcohol and tobacco to try to bring herself back to a normal functioning life. When sober, she sometimes gets overwhelmed with anxiety.[/size] [size=3][b]Parker Posey[/b] plays Nora in a beautiful and tender way, revealing her fragility in at times a powerfully naked way. Seeing Nora have an anxiety attack was something I'll not soon forget.[/size] [size=3]The biggest thing that troubles Nora is that she's in her thirties and still single. She also has not had a serious boyfriend since college. We watch her go through some humiliating experiences with men that are played for laughs on one level (at times Posey is absolutely hilarious) but heart-breaking on other levels.[/size] [size=3]At a dull party, after experiencing a few brief humiliations, Nora meets a French man named Julien, who hits on her very aggressively but also sweetly. Watching Nora decide how to handle Julien's advances was uproarious and poignant.[/size] [size=3]Through the process of getting to know Julien, Nora comes to learn a lot of things. She even ends up in Paris with her best friend (played very nicely by [b]Drea de Matteo[/b]) tracking Julien down but also on a quest for herself. There is a spectacularly beautiful scene in Paris where Nora meets an older man in a bar and has a conversation with him about love that causes her to sob. At that moment, Nora's wounds are so completely exposed that Posey sobs in a way you rarely see in movies. It's so real that it seems more like a documentary than a fiction film.[/size] [size=3]The happy ending with Julien is rather trite, but overall the film is uncompromising in its view of contemporary loneliness. It looks into the abyss with both eyes open and doesn't come to banal conclusions. [/size] [size=3]I recommend this fim, and I feel it deserves a lot more attention than it has gotten. Cassavetes deserves consideration as an Oscar nominee for Best Director, as does Posey for Best Actress.[/size]