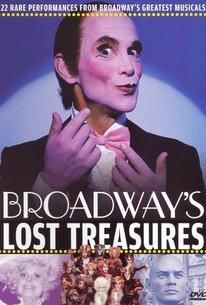 Broadway's Lost Treasures is a two-hour collection of musical highlights, culled from 19 years (1967-1986) of Tony Awards telecasts by Christopher A. Cohen, son of the original telecasts' producers, Alexander H. Cohen and Hildy Parks. The program is divided into four self-explanatory segments -- "Broadway Divas," "Leading Men," "Dancin'," and "Record Breakers" -- and presented by hosts Angela Lansbury, Jerry Orbach, and Chita Rivera. Musical numbers include the "Broadway Divas": Vivian Blaine ("Adelaide's Lament" from +Guys and Dolls), Patti LuPone("A New Argentina" from +Evita), Angela Lansbury ("The Worst Pies in London" from +Sweeney Todd), Carol Channing ("Before the Parade Passes By" from +Hello Dolly), and Julie Andrews ("Send in the Clowns" from +A Little Night Music). Next up are the "Leading Men": Zero Mostel ("If I Were a Rich Man" from +Fiddler on the Roof), Yul Brynner ("Shall We Dance?" from +The King and I), John Raitt ("Hey There" from +The Pajama Game), Robert Preston ("Trouble" from +The Music Man), and Paul Lynde("Kids" from +Bye Bye Birdie). Now for the "Dancin'": Joel Grey ("Wilkommen" from +Cabaret), Tommy Tune and Twiggy ("Chasin' the Clouds Away" from +My One and Only), Chita Rivera and Gwen Verdon perform "All That Jazz" and "Nowadays" from +Chicago, and Jerry Orbach from +42nd Street ("Lullaby of Broadway"). Then there are the "Record Breakers": Andrea McArdle and cast ("Tomorrow" from +Annie), the cast of +Annie ("You're Never Fully Dressed Without a Smile"), and Betty Buckley and the cast of +Cats) ("Jellicle Songs" and "Memory"). This also includes the bonus performances not seen on the PBS pledge-special broadcasts: Ann Miller and Mickey Rooney ("McHugh Medley" from +Sugar Babies), Patti LuPone ("Buenos Aires" from +Evita), Barbara Harris ("Movie Star Gorgeous" from +The Apple Tree), Bonnie Franklin ("Applause" from +Applause), and Dorothy Loudon and cast ("Easy Street" and "Tomorrow" (reprise) from +Annie).

There are no critic reviews yet for Broadway's Lost Treasures. Keep checking Rotten Tomatoes for updates!

There are no featured audience reviews yet. Click the link below to see what others say about Broadway's Lost Treasures!