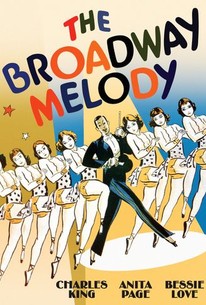 Critics Consensus: The Broadway Melody is interesting as an example of an early Hollywood musical, but otherwise, it's essentially bereft of appeal for modern audiences.

Critics Consensus: The Broadway Melody is interesting as an example of an early Hollywood musical, but otherwise, it's essentially bereft of appeal for modern audiences.

Critic Consensus: The Broadway Melody is interesting as an example of an early Hollywood musical, but otherwise, it's essentially bereft of appeal for modern audiences.

This landmark MGM backstage musical of the early sound era about broken dreams on the Great White Way features a bevy of standards by the songwriting team of Arthur Freed and Nacio Herb Brown. Freed later became unit producer of the legendary Freed Unit at MGM, which is the reason many of the tunes from Broadway Melody --""You Were Meant For Me"", "Broadway Melody", ""The Wedding of the Painted Doll""-- later appeared in Freed's seminal MGM musical Singin' in the Rain. The nominal story concerns midwestern sister act The Mahoney Sisters --Queenie (Anita Page) and Hank (Bessie Love)-- who come to New York to try to make it big on Broadway. Hank's song-and-dance man boyfriend Eddie (Charles King) has promised the gals a part in the new Broadway revue in which he is soon to appear. When Hank and Queenie come to see him, Hank is pleasantly surprised at the way Queenie has filled out. Soon enough, Eddie is making advances to Queenie. Queenie is attracted to Eddie too, but she doesn't want to steal her sister's boyfriend. So she Queenie takes up with a lecherous playboy, leaving it to Hank to put all the confused love relationships in perspective. ~Rovi

News & Interviews for The Broadway Melody

View All The Broadway Melody News

Critic Reviews for The Broadway Melody

If all the songs and ballets were taken out of The Broadway Melody it would still remain an absorbing spoken drama. On the other hand, If the dramatic element were taken away, the film would still be appealing as a spectacular revue.

Zowie! What a picture! Humor, drama, romance, action, thrill! And how!

Although the audible devices worked exceedingly well in most instances, it is questionable whether it would not have been wiser to leave some of the voices to the imagination.

A tedious musical comedy embedded in a routine story like a fly in celluloid.

Excellent bits of sound workmanship are that of camera and mike following Page and the heavy along the dance floor to pick up their conversation as they glide.

The staging is wooden, the story insipid, and the dialogue sequences mostly painful, but the film's integration of song, dance, and story was a clear narrative advance over the music pictures being released by Warner Brothers and Fox.

Bessie Love has the opportunity of her life-time -- and she makes the most of it.

It should perhaps be remembered that many musicals contain darkness, deep cynicism, and even high tragedy.

The first musical and sound film to win an Academy Award for Best Picture creaks from old age.

First musical to win Academy Award reeks of mothballs, but is undeniably the basis of perhaps a hundred others.

...cinematic evolution long ago froze The Broadway Melody in Precambrian amber. But while the movie is hopelessly dated now, it was the bee's knees in its day.

Audience Reviews for The Broadway Melody

Rotten Tomatoes has an error in its database. They have two films confused. "The Broadway Melody" was released in 1929 and won Best Picture at the 2nd Academy Awards ceremony. Director Harry Beaumont and Lead Actress Bessie Love also were nominated for Oscars but lost. The film was so successful that something of a franchise developed, with three films in the next decade borrowing the title. For example, in 1935, "The Broadway Melody of 1936" was released, directed by Roy Del Ruth and starring Jack Benny and Eleanor Powell. It was nominated for a Best Picture Oscar but lost to "Mutiny on the Bounty." Somehow the folks overseeing the RT database have gotten these two films confused. The entry for the 1929 film says that it was released in 1935 and contains a blurb about the 1935 film. Below is a review of the 1929 film called "The Broadway Melody" directed by Harry Beaumont. "The Broadway Melody" is a joy to rediscover. It is amazing (and depressing) that it has failed to maintain a reputation. But then again, how many films from the 1920s have been remembered? Americans born after World War II seem to have no interest in films made before their time. The land of the eternal present. But some films have maintained a reputation: "The Wizard of Oz" and "Gone With the Wind," for example. Some old Bette Davis and Humphrey Bogart films would be recognizable to present-day audiences also. The vast majority of worthy films, however, have been forgotten. "The Broadway Melody" is a perfect example. I think almost anyone would enjoy this film, if they got over their prejudice against old movies and just watched what was on the screen. Bessie Love's performance is so good that it still jumps off the screen. Her Oscar nomination was well deserved. (She lost to Mary Pickford). But just like the film itself, Ms. Love has been completely forgotten, despite the fact that she continued to work in film into her 80s. Love plays a woman who moves to New York with her sister in hopes of making it on Broadway. Initially you think it's going to be schmaltzy, like movie musicals tended to be in the 1930s. But this film has a heavy side, and it wrestles with class issues in quite a blunt way. Love's sister, for example, gets seduced by a wealthy predator in a way that is truly frightening. There are also bold insinuations of infidelity on the part of Love's fiancé. After all this sadness, Love has a breakdown on screen that goes on for several heart-breaking minutes. The songs may be all sunny and light. But "The Broadway Melody" demonstrates in an admirably frank way, in a genuinely artistic way, that Broadway's sunniness often stems from a desperate attempt to PRETEND that life is grand. Unfortunately, the film doesn't go quite to the depth that it could have, thus it doesn't deserve much more than a 7 rating. But this is still one of the better films of the early sound era and should be seen by more cinephiles today. Thank you to Warner Brothers for keeping this film alive by pressing it on DVD (a beautifully clear copy, incidentally), and thank you to Netflix for buying the DVD and making it available for rent. On behalf of the dozen or so Americans who appreciate cinema history, I thank you.

Boy, this film sure hasn't aged well. Granted, it is over 80 years old, but still. The story here concerns two sisters who are a part of a show on Broadway that get into a love triangle with a guy. I'm not sure, but I think this kinda of story line was old even back then. This is really not all that great, but it's not terrible. The music is okay, and the dance sequences are all right I guess, but the stroy is really not all that interesting. Plus, it's all very melodramatic. However, this film came out during the transition period from silent films to "talkies", and many films back then were really clumsy and pretty bad. What makes the film notable is its historic importance- it was a "pre-Code" film, so some of the content, though nothing new to modern audiences, was rather bold for back then. Also, it was the second film to win the Oscar for Best Picture, and the first sound film and first musical to take home that prize. This may be an earlier movie musical, but that doesn't mean that it's the best because of it. Many of the films of this type that came after are far better, but as a curiousity piece, this is worth a watch if you are a die hard. If you don't care for this sort of thing, then the only reason I would recommend it is if, like me, you are on a quest to see all the films that won Best Picture.

A very melodramatic romantic story surrounding this early talkie musical. A lot of the actors aren't so great in this movie either, but I think maybe they weren't supposed to be spectacular anyway, since the main characters are a sister act from the sticks who move to NY to make the big time, the characters aren't going to make it because they don't have enough talent yet. Anyway, the sound was really very good for one of the first talkies, and I enjoyed the movie.