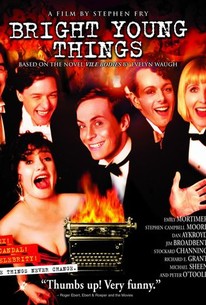 Critics Consensus: Colored with witty performances and a camp sense of satire, Stephen Fry's version of Evelyn Waugh's novel may only be fitfully successful but it does mark a promising debut for the British comic.

Critics Consensus: Colored with witty performances and a camp sense of satire, Stephen Fry's version of Evelyn Waugh's novel may only be fitfully successful but it does mark a promising debut for the British comic.

Critic Consensus: Colored with witty performances and a camp sense of satire, Stephen Fry's version of Evelyn Waugh's novel may only be fitfully successful but it does mark a promising debut for the British comic.

British writer/actor Stephen Fry makes his feature-film debut with the witty, sophisticated comedy Bright Young Things, adapted from Evelyn Waugh's 1930 novel Vile Bodies. Set in London during the '30s, this stylish period film follows an ensemble cast of well-dressed and highly literate partygoers. Aspiring writer Adam Fenwick-Symes (stage actor Stephen Campbell Moore) loses the manuscript of his first novel when traveling through customs. He then sets out to raise enough money to marry his sweetheart, Nina Blount (Emily Mortimer), the daughter of a colonel (Peter O'Toole). All in the name of love, Adam seeks funding through a constant stream of parties, meetings, and conversations with eccentric acquaintances. Cameo appearances are made by the likes of Dan Aykroyd, Simon Callow, and Stockard Channing. Bright Young Things was shown at the 2003 Toronto Film Festival.

Simon Callow
as King of Anatolia

Fry's dialogue is terrific and interlaces with Waugh's own wit seamlessly.

Satire should seek to sterilise or maim its targets; Fry wants us to feel for them.

The 'wit' is leaden and unfunny; the narrative's progress ungainly; the direction stolid.

One conceit of writer-director Stephen Fry is to dramatize parties as knots of chaos, social hurricanes that spill across the landscape this way and that, ruining lives, eating time, preventing progress of any kind.

Though Fry's movie has plenty of nasty wit, it lacks the sheer luxurious malice of Waugh's book. Fry is acerbic; Waugh is lethal.

Suffers from feeling like it's just pretending to be good when it's obviously much, much happier being bad. But when it's bad, it's very, very good.

What's good about the movie is the lesser known up-and-corners who play the bright young things themselves, especially the appellatorily appropriate Fenella Woolgar as Agatha

Though it falls short of Fry's best work in other fields, this is a sound first feature.

The wit never comes through the art deco settings.

If a movie can draw this kind of talent for mostly miniscule roles, how can you go wrong?

The film is a breezy and likable enough entertainment, especially for those of us unfamiliar with Waugh's original.

It is in the humorous moments that the movie really hits its stride, with the supporting cast providing many of the laughs.

"Bright, young people. That's what they call you. Well, I guess one of out three isn't bad." Bright Young Things is one of the lightest things I've seen in quite a while. It is not serious at all, nor does it take itself seriously. Its flinty, funny, and irreverent. I was curious to see how Stephen Fry would in the director's chair, and he is really rather good. Plus, there is an incredible lineup; with James McAvoy, David Tennant, Jim Broadbent, Michael Sheen, and so many others. I really would never want to watch this again, but it really is great fun to watch once.

I went into this knowing that it would be difficult to capture the brilliance of "Vile Bodies", which is one of my favorite novels. I have to admit I was pleasantly surprised (and thoroughly amused) at how well Mr. Fry captured the feel of the book. The set designs and costumes are wonderful, the cast is amazing and the writing (al a Waugh) is brilliant and clever. I was even impressed by Dan Aykroyd who is not normally a "draw" for me.

A devilishly delightful romp with excellent social commentary about access and excess.