The Bridges of Madison County1995 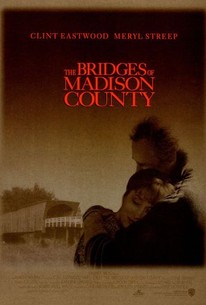 The Bridges of Madison County Photos

The brief, illicit love affair between an Iowa housewife and a post-middle-age free-lance photographer is chronicled in this powerful romance based on the best-selling novella by Robert James Waller. The story begins as globetrotting National Geographic photographer Robert Kincaid journeys to Madison County in 1965 to film its lovely covered bridges. Upon his arrival, he stops by an old farmhouse to ask directions. There he encounters housewife, Francesca Johnson, whose spouse and two children are out of town. Thus begins their four-day affair, a liaison that fundamentally changes them both. Later Francesca chronicles the affair in a diary which her flabbergasted grown children read; never would they have expected their mother to be capable of the passion she experienced with Kincaid. ~ Sandra Brennan, Rovi

Alison Wiegert
as Child No. 1

Brandon Bobst
as Child No. 2

News & Interviews for The Bridges of Madison County

View All The Bridges of Madison County News

Critic Reviews for The Bridges of Madison County

Bridges is an admirable achievement, one that probably does more to reposition its maker as someone who can carry a movie without carrying a gun than as the director/star of a Love Story for the Loving Care set.

The result, if rather thin and certainly far from a masterpiece, is nevertheless quite lovely. This affecting little film is easily one of Eastwood's best efforts as a director.

Eastwood's Bridges has the energy and spontaneity of a picture that was shot quickly. And that serves the material well, because it removes the solemnity that could stiffle a modern classic.

Despite all his craft and sincerity, [Eastwood] and screenwriter Richard LaGravenese can't quite turn Robert James Waller's cardboard best-seller into flesh and bone.

The strength of Eastwood's Bridges is in its patience, and how it lets the love story develop from start to finish, even though the audience knows from the beginning the broad strokes of what's going to happen.

Those who found Waller's book an outrageously bad read may be gratefully surprised to find less mush in the movie.

Beautifully photographed and directed with an intimate maturity, the film reveals its characters in an unhurried way, thus making the audience accomplices in the unfolding liaison.

The movie, thank goodness, is better than the book. What's more surprising is that The Bridges of Madison County is an accomplished piece of moviemaking.

The emotions evoked by this Bridges are in a minor key compared to the book, but they are honestly earned.

Audience Reviews for The Bridges of Madison County

Same as the book, boring and cliche

I was reluctant to take a chance on this one because of the pretense, but the story and Miss Streep drew me in. Now that I've seen it - no regrets.

Not the quickest moving movie, but worth watching if you can perserve with it. Very sad and has something to say about living the life that makes you happy, and not to please everyone else. The main character does not manage to do this and you see the impact not only on her own life, but on that of her daughter who has been raised to see life in the same way and now also finds herself less than happy in a bad relationship. Sympathy is also there for the husband as it was not his fault he was not the right person for his wife. Nice acting and not a feel good movie, but a good one for anyone who likes to think.

The Bridges of Madison County Quotes