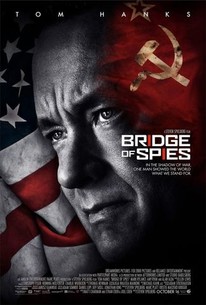 Tom Hanks stars as the American attorney tasked with negotiating the release of a U-2 spy plane pilot who was shot down over Russia at the height of the Cold War in this historical drama from DreamWorks Studios. Steven Spielberg and Mark E. Platt produce a film written by Matt Charman. ~ Jason Buchanan, Rovi

Wes McGee
as US Pilot

Andy Schneeflock
as Gentleman on Subway #1

Laurie Dawn
as Secretary on Subway

James Lorinz
as Gentleman on Subway #2

Mike Houston
as Man in Courtroom

Will Rogers (IV)
as Frederic Pryor

News & Interviews for Bridge of Spies

View All Bridge of Spies News

Critic Reviews for Bridge of Spies

Director Steven Spielberg gives audiences a meticulously composed espionage thriller, which establishes a tense atmosphere from the start and keeps the viewer engaged throughout. [Full review in Japanese]

Bridge of Spies has some hold-ups and blockages. But in the best scenes the traffic flows fluently over the purling, perilous currents of cold war history.

As a Cold War film, it's strong. As a window into Spielberg's mind, it's essential.

Bridge of Spies is a heart-on-its-sleeve affirmation of American values -- not in the loaded contemporary sense of the term, but in the way the country was founded on values we have to work and fight to abide by.

Authentic re-creations of the period, including duck-and-cover clips about a nuclear holocaust that frightened young students, serve as a reminder of a time, not unlike our own, when the threat of terror kept a steady and disturbing beat.

The real power of Bridge of Spies is that it adheres to a sadly old-fashioned code of decency and equal justice for all under the law.

Working from an excellent screenplay by Matt Charman that was rewritten by Joel and Ethan Coen, both Hanks and Spielberg are at the top of their game.

Spielberg paints everything in broad strokes, and yet for a character-driven spy film to succeed, it's the smaller moments that are the most important-but here they're left behind.

It's an excellent thriller who knows how to handle a difficult cocktail of drama, tension and humor. [Full Review in Spanish]

An almost invisible camera shows us a Russian spy trapped by the FBI - impeccable sequence, in which Spielberg articulates a certain suspense based on details. [Full Review in Spanish]

Spielberg's filmmaking shows extraordinary elegance and sweep, a grand visual style that was once called conventional but is now all too rare.

Audience Reviews for Bridge of Spies

Spielberg's drama about the exchange of prisoners during the early days of East germany behind the Berlin wall is no nail-biter but thoroughly entertaining. Tom Hanks is the obvious choice for the honorable lawyer negotiating the deal, but you can't fault him for being good at what he does. Rylance certainly deserved the Oscar for his supporting role as the imprisoned russian spy. The film mostly relies on its cold war atmosphere, the actors and their lines, but that works because there actually haven't really been a lot of films about this chapter in recent history yet.

An American lawyer goes to Cold War era Berlin to negotiate a hostage exchange. Tom Hanks and Mark Rylance, who surprisingly won Best Supporting Actor, lead this cast in a decently tense Cold War thriller. While it's true that the relationship between Donovan and Abel is underdeveloped, there's enough in this film to make their connection believable. And the plot moves slowly but surely. Spielberg, however, has no restraint in his message. The film is about American exceptionalism and the primacy of American Values (never mind the fact that several other countries share similar values). Yes, there are token "Bad Americans," but seen especially in a pair of scenes in which Germans attempting to climb a wall are killed and Americans attempting to climb a wall are safe (and not shot by police), the film pounds us over the head with just how wonderful we are. Without getting into a disagreement about the validity of Spielberg's point, we can simply say that the film lacks subtlety. Overall, there's a decent film here even if it's heavy-handed in parts.

Steven Spielberg. Tom Hanks. Period piece. Sound familiar? I mean, it definitely is, but this film from the dynamic duo proves to be more than meets the eye. Based around the true story of Brooklyn insurance lawyer James B. Donovan taking on the case of reputed spy Rudolf Abel, the story is set among Cold War tensions at their height, shortly after the Rosenberg trial. Tasked with helping Abel gain constitutional rights against a country at arms with the Soviets, it is a film filled to the brim with intelligent discourse and a penchant for reflective empathy. Read more at bluefairyblog.com

An intriguing behind-the-scenes negotiation during a heightened period of danger, Bridge of Spies relies upon its history to do the heavy lifting and it's plenty enough for a handsomely made, reverent, and engaging legal procedural that's also hard to muster great passion over. Tom Hanks is again a noble everyman, this time an insurance lawyer, James Donovan, called in to defend a mild-mannered Russian spy (Mark Rylance) captured during the Cold War. Things get even more complicated when spy pilot Francis Powers is shot down over Soviet airspace. The movie's civil liberties arguments are pretty clear and still applicable to our modern era, but the movie becomes exponentially more interesting once Powers is captured and Donovan travels to Eastern Berlin to negotiate a prisoner swap while trying to work three sides, the Americans, the Russians, and the Eastern Germans who were hungry for legitimacy. It's during these back-and-forth negotiations and posturing that the movie really hits its stride, pulling incredible facts together while forcing our protagonist to be the world's greatest poker player. It's the details of this story that makes it feel more fulfilling from spy techniques to the new life on the other side of the Berlin Wall. The acting is robust and Rylance (TV's Wolf Hall) makes a strong impression in a role that requires him to be cagey to a fault. Hanks is his usual determined, inspirational self, which plays all the right emotions in a way that still feels expected and a little boring. Bridge of Spies is a slighter Steven Spielberg affair, a good story well told with good actors but a movie missing essential elements to plant itself in your memory. It's a fine movie but sometimes fine is just not enough, and considering the talent involved in front of and behind the camera, I expect better. Nate's Grade: B